Ugh, I can't work any more today. It's so weird ----- yesterday I wrote a couple solid pages and then beat myself up the remainder of the day that I wasn't working still more, feeling awful about the whole thing and very stressed and under the gun. Today I wrote another couple pages and I feel great about it ---- after sketching it all out I spent a long time, guilt-free, puttering about on the Internet, and finally just recently typed and formatted it all up. Roughly the same amount of work, totally different reactions on different days.

That said, I got an email from my advisor ---- remember how I dumped a chapter in her box earlier in the week? Well, she responded that the timeline I had described sounded good but that I needed to turn the final chapter in to her right away before she would definitively ok the timeline one way or another. So I've a hard deadline now ---- whatever I've got on Monday morning, I'm printing and dumping. And whatever I dump had better be done, if not, uh, good.

There's something kinda liberating to accepting that ---- I'm writing much faster now that I've given myself the ok to just make up shit. Now, at first that just meant sketching out the time period and setting the story without bothering to exhaustively cite all the historical background, but this is proving a bad temptation. I mean, you know me, why do you read this blog? For the crazy, over-the-top inventions! I'm having intense urges to see just how far I could push this making up business ---- imaginary critics? Imaginary primary texts? Alien invasion theories? Ohhh, somebody stop me before I decide to test just how closely she's going to be reading this last chapter!

But despite all that, I think I am in a moment of dissertation zen because I have finally realized that I will never actually finish. See, there was this philosopher dude named Zeno who figured it all out: 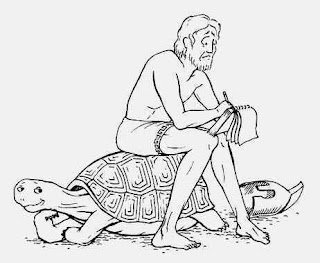 Now some people might claim that this is simply a confusion of discrete and continuous motion, and state that an understanding of sets and infinite series would resolve this paradox, but they would be wrong! Because they do not understand that dissertations operate under their own special laws of physics, called string theory, which basically states that since dissertations behave like both a wave and a particle it is impossible to tie all of the arguments within them together even with an infinite amount of string and a room full of monkeys with typewriters (although the monkeys can get pretty tied up themownselves) and that as an external deadline approaches zero, procrastination approaches infinity, and furthermore the gravitational denseness of dissertational prose can coalesce into a jargon black hole into which all free time is inexorably sucked and is impossible to be measured with any scientific instruments, UNLESS the weight of the collapsing giant ball of hot air is so great that it rips a hole in the space-time continuum and creates a wormhole, through which you the hapless dissertator are swept only to be deposited back in time to watch your younger self about to embark upon the foolish task of starting the dreaded dissertation that caused so many problems and Oh! the humanity, you are about to call out to your former self, You fool, don't do it! Don't endanger the workings of the universe and go to grad school! Choose law school! Lawwwww schooooool! but you realize that if the present you and the former you were to actually meet it would be like matter and anti-matter touching and the resulting cataclysmic explosion would transform everything inside out, black into white, Being into Nothingness, and every up quark into a down one. Whew!

So instead you give up, cynically crack open a beer, and allow your younger self to continue her merry (if doomed) way. "I wouldn't do that if I were her," you mutter to a fellow ABD, "but hey, that's her problem."
Posted by Sisyphus at 5:21 PM

I wondered if you'd get to string theory...

Aren't you supposed to be finishing up????

Gosh, this is a lovely post. I hope you're not waylaid by any wormholes or tortoises before Monday!

good god girl! you crack me up!