Recent studies have revealed that, as seasons in, for example, Spain, get longer and drier, the olive trees there flower earlier and disperse their pollen for much longer time periods, extending the duration of allergy season for local sufferers. 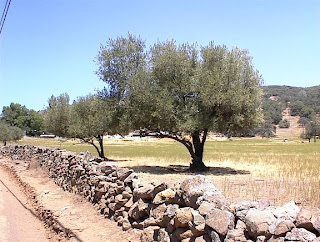 In a similar fashion, my own extensive research reveals that the academic job search season is also extending far beyond the borders of its usual timeline, beginning earlier and earlier each fall and pushing further beyond New Years each succeeding year; we can expect that soon this will be a "season" in name only and academic job candidates will be applying to permanent jobs all year long, laboring under an application workload equivalent to teaching a course each quarter.

The reason? Global warming. You don't believe me? Countless scientists, academics, and policy makers have all come to the definitive conclusion that global warming is a real and immediate threat, but hardly any attention has been paid to the effects of global warming on the fragile ecosystem of the gentle and threatened species, homo academicus.

These unassuming creatures are in fact highly territorial, and the increasing loss of their habitat has driven this usually staid species to nomadic behavior, manifested in the phenomena of "visiting positions" and "freeway flyers." Competition in their extremely crowded ecological niches has led to the near-elimination of the more exotic subspecies such as the literary theorists and gender-studies specialists, while evolutionary pressures have driven increasing numbers to adapt to comp and technical writing. 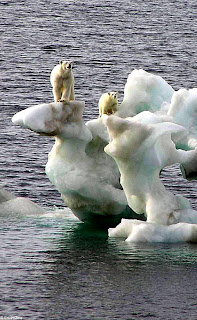 (two postmodern theorists in the dwindling habitat of an ivory tower.)
Although not as cute as other endangered species, academics are in fact a "keystone species" vital to the health of their local communities, and as such function as a canary in the coal mine. Normally a very stable and settled group, academics provide education for some members of their local population while consuming the goods and services given off by others in the habitat. Further, the unique manner of their work enables them to participate in the activities that make for a healthy ecosystem, including service with area public schools, local governance, and a variety of charity and activist work. When academics are forced to travel huge distances or to invest massive amounts of work into job searches to survive on subsistence level wages, their involvement in community service and democratic participation declines, including their consumption of local goods, which can lead to a buildup of unconsumed goods, contributing to a stagnant economy.

So what does all this have to do with global warming? As you can see from the highly technical graph below, I have a graph. (Graph courtesy of the Association of Departments of English, which has more detailed job statistics recently posted at their web site.) This graph shows that the fluctuations in academic habitats (notated as "tenure track" habitats, the top line) highly correlates with the fluctuations in global temperature (see the bottom line).

We must act now to reverse these drastic trends and to ensure that our future generations will be able to share in the glorious sight of herds of academics on the fruited plains, plus reap the benefits they bring to a stable economy. I urge our new president to take bold and decisive action, setting up a series of "academic preserves" where academics can teach, research, and contribute to the community without worrying about insufficient wages. These preserves can be built by infusions of resources into already existing ivory tower habitats, whether public or private, and at far less cost than this year's earlier bailout of Wall Street CEOs, who are neither a small nor an endangered population. Just don't make the application process too baroque, ok? I'm a little tuckered out from all the prior ones.
Posted by Sisyphus at 11:31 AM

Global warming being such an important issue, since it's putting in danger the lives of millions of human beings or also of our fellow animals and bugs and little plants and microscope bacteria, shouldn't be something for you to make fun with. Shame on you!

Captain USpace said...
This comment has been removed by a blog administrator.
January 4, 2009 at 3:28 PM

I think this is absolutely brilliant. Of course, I probably am raping the earth even as I type this, and so perhaps you should ignore my feelings on the matter.

Dr. Crazy, I hope that at least you're wearing a condom while raping Mother Earth. Didn't you hear Her say no? No means no! And, in your urge, are you not the least concerned about the incest allegations?

On a completely different subject: When will homeless people start recycling? I can't take much more of those cheap wine tetra paks lying around in the streets, without proper treatment!

You should be writing for The Chronicle of Higher Education. (Then again, who says you aren't?) This is brilliant. :)

Once again, I can only echo in my admiration for your brilliance!

Do we know if there's correlation with pirate numbers?

I'm not sure you've fully accounted for the threshold environmental effects of larger, happier herds of free range academics, especially the greenhouse gasses released by our information metabolism. I believe it's been established that academic methane output is greater even than Argentine beef, pound per pound, although the Humanities breeds seem to be especially prolific emitters.

Once again, you crack my shit up! When we take over the world (with my band of ninja warriors), you will be in charge of worldwide media, propaganda, and transportation.

Well, yes. Although come to think of it, there should be a way to capture the energy from our gasses, like some pig farms do with their poo lagoons. I believe Leonardo designed a collecting apparatus along these lines, must check the archives...; then, as medieval woman says, we would need to figure out a way to chemically "crack [our] shit up" into its elements for efficient combustion.

With the new presidency, I believe there will be ample financial incentives to repurpose ourselves as essential sources of 'green' alternative energy, which would retrospectively validate the overbreeding we've been doing lo these many years. It's a win-win, I tells ya.

I believe there will be ample financial incentives to repurpose ourselves as essential sources of 'green' alternative energy, which would retrospectively validate the overbreeding we've been doing lo these many years.

can't be worse than the old method of control, which was just to eat our young.

Ya. Works for hamsters. Biomass is biomass.