My complete inability to finish these CC apps is probably telling me something, eh? I think it's more that the applications suck than the jobs do, but I really can't get myself to work on some of these. (seriously, grade your sample essay? Sigh. Yes, I totally see why you want me to. It's the most sensible way to screen for this type of job. And yet? I'm about to get all my finals and final projects and have no desire whatsoever to mark up that thing and justify my comments with recent pedagogy theory. Couldn't you have an ice-cream eating contest instead? No? Bummer.)

There are so many things I'd rather do than fill out more applications, like shop online, or get a root canal. And today, in conversation with some people who have actually snagged jobs this year, I admitted to my cravings to have and decorate my own office. (Having my own salary would help.) But I did not reveal the details of my deep, dark, perverse decorating desires as I knew they would cause people to stare and back away from me uncomfortably.

I want to decorate my office like a wunderkammer.

k heap. I sooo want to do it! Granted, the walls full of bookshelves would kinda get in the way of covering every conceivable surface with curiosities and pseudo-scientific trash, but there must be some way to integrate the two! Oooh, and if I could get one of those cupboards with all the little shelves and cubbies and mini drawers ---- oooh! All my obsessive-compulsive little circuits are being set off by that image! Yay! 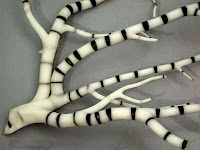 I'm thinking some interesting shells, dried coral, candles, brightly-colored rocks, maybe a skeleton of a narwhal or something like that stuck on the wall, bowls filled with beans or pebbles or seeds or old keys, various old bits of instruments or antique utensils or old torture instruments, interesting branches or leaves, along with whatever random shiny things I could include from other cultures without being too offensive. And of course, old cast-iron nose-picking tools.

It would look something like this but way less orderly: 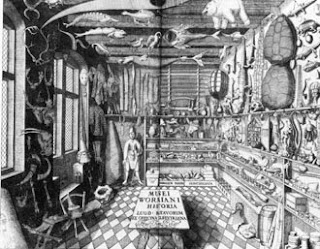 And the stuff should be not too deadly or fragile, as I imagine students coming in and handling all the stuff and admiring the textures when they come in to see me in office hours (clearly I'm imagining myself at an exclusive little liberal arts college?) And as I'm writing this I recognize that this emphasis on texture and luscious, artfully chaotic display probably was instilled in me by all those upscale bohemian retail stores that I claim not to like but have been influenced by all the same: 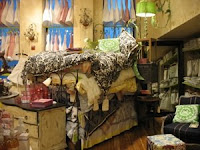 Like Anthropologie shown above, or Crate-N-Pottery Barn or whatever site I stole these from below: 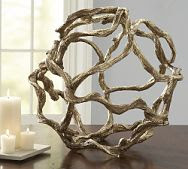 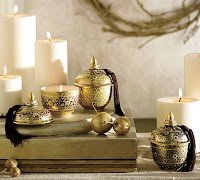 Sigh. They really can burrow into our heads and take root like the creatures from Alien, can't they? Maybe it would be different if I actually salvaged the stuff from junk stores and ebay? Or had my students bring interesting things back from their travels all around the world? Sigh. Maybe I should just embrace it and hope that the students all like those kinds of stores too. Then they can happily browse around in my boho-gypsyish wunderkammer and touch all the stuff while I tell them stories about wigs and eighteenth-century nosepickers.

As long as they don't ask me for a store catalog on their way out, eh?
Posted by Sisyphus at 10:53 PM

You pretty much HAVE to have a phrenological head!

When I lived where a crate n' barrel was within easy reach, I used to love just looking at the "we live at the beach house" lifestyle they projected. Amazing, how appealing that look is! But it didn't fit with my grad student ramen and tuna budget.

I think you should be given an office to decorate just because you have such a great decoration idea. Most of us don't decorate; we just stuff things in until there's no more room.

But you know this would only lead in one direction, to one thing...

Which is to say: you are welcome to liveblog your encounters with Mephisto, but I was always especially partial to the Erdgeist. See if you can get one of them to hang out. Kthx!

I really like this idea -- very steam-punk. I have an office in desperate need of some help when I get back, perhaps you'll let me consult with you when I start on that project.