Knitting the raveled sleeve of something-or-other

Still revising. Bleah. Someone who had agreed to see the outline of my argument couldn't decide based on that and asked to see the actual draft. Uh, draft? It's not really in "draft" form any more. Consider that the previous suggestions I've been given were to integrate the critics and rearrange the essay structure. So I broke it open and started stuffing things into the various seams, and then moved everything around and now it's not really in a state where anyone but me could read it and understand what is going on. (bolded questions to myself that include "YOU IDIOT" and "What The Hell Was I Thinking Back When I Wrote This" don't really help either.)

It's like --- do you know anybody who knits things? When they have a mistake that they discover way back in their work they have to rip it all back to that point and then re-knit it over. They call this "frogging," according to the internet. Well I don't really knit but I figure that's gotta be a good way for describing how I'm revising things at this point, with the assumption that anybody who's ripping back large chunks of their knitting will have a huge tangly mess of unknitted crap covering their whole lap as they try to figure out where they are exactly in the pattern and if they have actually made it back to the mistake yet. I figure my "draft" looks a lot like this: 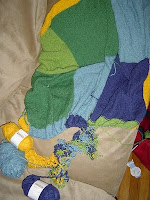 Yup, somebody told this person that they forgot to make a yellow square in that pattern and now s/he has made a huge ol' mess getting rid of stuff (see the tangle) which s/he now has to untangle in order to splice some of that yellow stuff in.

Actually, I don't think this pic quite captures the sense of sheer messiness and defeat that I feel when confronting my revision, any of my revisions. Maybe this one? 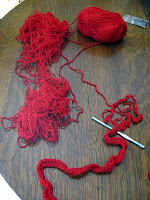 Mmm, no. Really I need to find a pic where the knitter has managed to knit herself to the sofa and is completely aswirl in loose yarn and can't find the spot in the project she needs to fix. And there are cats stuck in there somewhere, unable to move because of all the tangled strings. So, maybe its not like all the knitters I found blogging about knitting on the web, but something infinetely worse. I'll start looking through the museum of torture websites to find a more appropriate metaphor tomorrow.

Right now, (sigh) it's back to the untangling.
Posted by Sisyphus at 3:42 PM

It sounds like you're working on the paper I revised last summer. It took two months of doing nothing but working on the paper and weekly meetings with a friend (we traded off--her paper one week, mine the next) to get everything integrated right. I had so many different drafts I felt like I was drowning. But now the paper is great. (Although, I still hate it a tiny bit because it I remember how much painful work it was whenever I read it.) Anyway, my point is that I feel your pain. The best strategy for me was having to be responsible to my friend for a new draft every other week.

You can do it!

I understand--and have come to see that phase as a part of the process! Actually wrote a blog entry on it once when I was so frustrated I could barely look at the draft anymore.

Wishing you the best...

Do you have a picture of someone who has thrown down their knitting and walked away in utter defeat? That's how I've been feeling about my revisions lately.

I know what you are talking about - that's how I feel about My_Very_Important_Thesis_Chapter: lots and lots of pieces and the connecting parts are still missing.

Thanks for the commiseration everyone!

And if I _could_ walk away from the knitting in defeat I would! I think I have sewn myself to the couch, and I can never get away from this.