Nothing much to report

I'm still toiling away at my various projects and things. Today I made some good progress, unimpeded by illness or injury (and let me say that 2009 has been The Year of The Injured Sisyphus, for some reason. Lame! (heh heh)) and I hope to also get a lot of work done tomorrow. I should go check my listy lists, made with many different colored pens, and remind myself of my next deadline.

What do you think of my plan to celebrate with a little of this as soon as I send off my article? 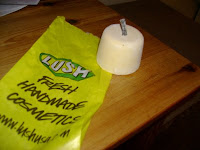 Isn't it cute? It's got a vanilla pod sticking out like a little candle wick. Hee.

And also for some reason a whole bunch of people just befriended me as Sisyphus T. Cog on facebook. I basically never go on that one, honestly, and had planned to pretty much shelve it. But then some people who were bloggers and aren't now sent friend requests and it is a handy way of keeping track of people. (plus, I get to find out who people are! I love snooping.)

This whole multiple identities on facebook is difficult, though ---- I keep getting confused, and paranoid about whether I'm outing myself (maybe that's less important on fb?) My alter-ego being friends with all of your pseudonymous alter-egos and possibly with your real selves as well is all very bewildering and exhausting. But, a cog's gotta do what a cog's gotta do? Whatever that means. I think it means pulling out an old movie tonight and seeing if there's any ice cream. 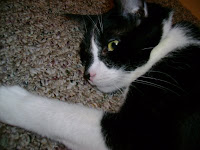 This one is not a reward for any of my to-do list tasks. Rather, he is a source of constant torment and annoyingness. But, even so, he's still cute!
Posted by Sisyphus at 8:28 PM