On Dress, and Men

I recently watched the lovely little film Beau Brummel: This Charming Man, which came out on BBC tv back in 2006. It was cute, very nicely done, especially if you loved the various Jane Austen adaptations and want to see Regency-style costumes. I found it a little bit slow and lacking in plot events, but I must admit that I am not a fan of biographies or biopics for just this reason, so don't take this as a reason not to see it.

It stars James Purefoy, the lead from Rome, so if you want to admire him as he smirks handsomely at the camera and ogle his frequent dressing scenes --- and dressing is almost as erotic an act as undressing, so who wouldn't? --- then this little film is perfect for you. There is some great humor with the narcissism of the dandy, as several scenes make comedy out of the fact that all the members of this love triangle are named "George," as well as a weirdly literal interpretation of Sedgewick's "between men" theory ---- I don't know if this was from the biography they adapted, or how the director wanted to set it up, or if they thought this was the only way they could represent queerness on mainstream tv, or what. If you have more info, let me know!

I love costume and questions of dress, and found their portrayal of the dandy figure to be fascinating --- entertaining, yet explanatory enough to use in the classroom. Plus, there is this bizarrely funny scene where fops meet dandies and battle on the streets as if they were mods vs. rockers, or perhaps Sharks vs. Jets:

Seriously, watch and laugh. I was so struck by it I decided to finally get off my ass and learn how to cut video clips and upload them to Youtube --- something I have said I wanted to do for years now for my classes, and now I know how. Feel free to play it for your classes, or perhaps this other fan video (not created by me) on the rules of dandy dress:

What I found fascinating, when I went to find the "rumble in the streets" scene (and was forced to cut and upload it myself), was that there were so many fan clips of the film, cut as music videos --- they're easy to find if you click through and see the recommended videos attached to these two. Set, of course, to The Kinks' "Dandy," Morrisey's "This Charming Man," even songs by the Dandy Warhols, the surprise for me was that they had all been re-cut to excise the homoeroticism and revert to the film grammar of heterosexual romance, to the extent that pretty random women (it's a man's world in this film, baby) who happen to be looking at the camera get spliced in to sub for the the Prince Regent or Lord Byron as the recipient of Brummell's steamy looks. I guess I shouldn't be too startled though, considering how much the Regency period has been colonized by the bodice-ripper romance genre.

Ok, I would say even more but I have to run off and meet some friends, so I leave you with a screenshot of one of the many dressing scenes of the movie: 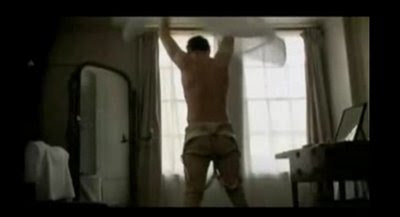 Your Fops vs Dandies is a classic. That is some major crotch cam close-up in the final frame, though! You make an interesting point about people re-cutting this to erase the homoerotic/ homosocial aspects - like we 'moderns' can't handle the ambiguity in Regency expressions of masculinity.

Well, you know they had to make clear just what exactly that powerful walking stick was standing in for, heh.

And I don't know much about fan fiction, but the one thing I do know about is all that "slash" fiction written by heterosexual women about Spock and Kirk, so, you'd think they would "get" the slipperiness of Regency relationships.