What the kids are listening to these days

I've been hearing the new single, "I love college," by Asher Roth all over my local radio stations these days. I'm kinda likin' it, in spite of myself, as it's simple and catchy in a mellow, funkified beat kind of way. Youtube won't let me embed it here (probably to get accurate playcounts for marketing purposes) but you can go here to watch it. If you're like me and don't want to bother with clicking away to watch something in the middle of reading an article, I've stuck some random screenshots in my post for you. Or you could push play and have it on in the background while reading. 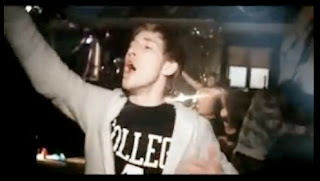 So with this album are we seeing the complete death of hip-hop? Certainly we're seeing an unprecedented whitening of it. Roth's promoters, or the music-mag journalists, evidently are pushing the white rapper=Eminen connection for all it's worth, trying to foment a rivalry between the two, and Roth even has a song taking issue --- cautiously --- with the comparisons and saying he's his own guy. (Side note: Roth --- is that a Jewish name? I haven't seen anybody bring that up in their discussions of "whiteness," which is interesting in itself. I haven't listened to his album to see if that's important to his rapping persona.)

It's not much of a comparison. If Eminem can spit more lines per second than Rush Limbaugh can snort off a hooker's ass, sounding like he mixed meth with his ritalin and about a half dozen other uppers (which, hell, he probably did), Roth ambles through his lyrics with the beatific bliss of the West Coast pothead. Probably why the song's so popular on my campus. 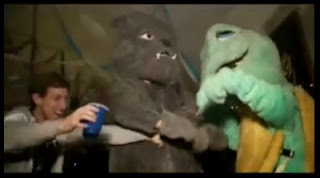 Furthermore, Eminem may be white, but his hardscrabble childhood in a predominantly-black neighborhood gave him the "cred" --- the trappings of "blackness" --- that allowed him to be taken seriously in hip-hop. In contrast, Asher Roth comes from a wealthy suburb and graduated from West Chester University, and his lyrics deal exclusively in the minutiae and privilege of bored college kids. As Zach Baron, reviewing the album over at the Village Voice puts it: "Roth's boy-from-the-'burbs shtick came with a mouthy, complete-sentence cadence and an outsize fascination with upper-middle-class liberals, with whom he self-identified." Completely eschewing the traditional rags-to-riches, clawing-to-the-top narrative of hip-hop, Asher tells Baron "I just want to tour. I want to be able to live comfortably." You can't get much more middle-class mindset than that.

But if he sidesteps the hustle and bling-bling of so much materialistic hip-hop, along with any overt references to ghetto or black-specific culture, Roth also strips it of any anger or politics that has been so central to the genre, and the part I always liked best. No native tongues, no civil rights, no CNN of the streets, this is postracial hip-hop --- if by postracial you mean everyone is assumed to be white and upper-middle-class and mellow about it all. Blackness, black people, the whole history of black and hip-hop (hello?) has been sanitized out and made safe for guilt-free white consumption. It reminds me of that website Stuff White People Like. 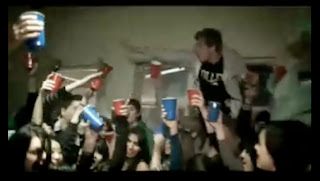 Baron writes that Roth's skill is at "describing a whole milieu—white Wu-Tang–loving kids at leisure, we'll call it" that hasn't been seen in hip-hop lyrics before. I might say that Roth has produced some great party music that the white Wu-Tang-loving kids can blare out their speakers without worrying that they'll be called "wiggers" or get the crap beaten out of them on the street. And that's fine, whatever. Eminem himself would tell you Elvis did it to rock-n-roll long before anybody "whitened" hip-hop. I look forward to whatever edgy new musical style will emerge from the street to replace hip-hop now that it's become completely mainstreamed. 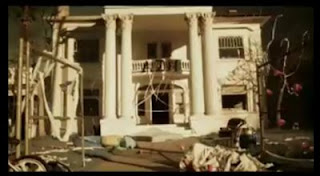 What bothers me is that interviewers and journalists are taking the prefab "triumph over adversity" and "breaking historic barriers" and stenciling it over Roth's experience without thinking much about it. To say that a wealthy white guy, through some hard work and lots of connections, became an overnight rap headliner in a largely non-white milieu and to present that as some sort of historic integration or move toward equality? That's just bullshit. Hooray for the overdog, who has returned a piece of black power and prominence to its rightful spot in white hegemony. Baron makes a sly dig at this theme, pointing out that the whole point of his songs is that he's had no adversity, and noting that the song "Bad Day" "is about a particularly rough, iPodless airline trip." Ouch.

But I still haven't even gotten to what really bothers me about this song and the video! 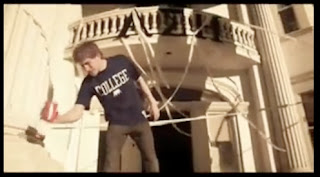 (Hellooo Animal House. The letters on that frat house are his initials, if you were wondering.)

The song is the story of what he's learned at college, why he loves it so much he never wants to leave. What bugs me is that college --- as in classes, learning things, planning what you're going to do with your life, mental work --- is never mentioned! While I guess it's progress that "don't have sex if she's too gone / when it comes to condoms, put two on" is given as obvious advice (though I'm a little worried about how literally we're supposed to take that putting two condoms on bit), this song is selling a generalized vision of college as an endless utopian binge. (The bridge on the video repeats the call-and-response of "do something crazy," whereas on my radio it goes "chug! chug! chug! chug!")

I know that this completely generic image of "COLLEGE" has been marketed to kids for a long time now, but the video really clarifies some nagging doubts I've had. It's like how the marketers couldn't sell the Beach Boys as the beach lifestyle nationwide, so they substituted cars in the lyrics and car culture as something all American teenagers would have access to and understand.

This video is the complete stereotype of wealthy college party life (funny how people only complain about negative stereotypes) and it brought home for me how homogenous "COLLEGE" life is across the country --- how my friends who graduated from UDel and UMich and UConn and WSU and the California colleges can all tell the exact same stories of "COLLEGE" culture and parties, from quarters and beer pong to kegstands and the red plastic cups.

Popular culture has been marketing "COLLEGE" to future students far more constantly and effectively than any specific university ever could. How many of your students do you think wanted to come to a college in particular rather than just "get the COLLEGE" experience? How many of them think of "COLLEGE" with the same expectations and goals that you, the professor, do? This troubles me and even now I can't fully explain the problem. Asher Roth would probably tell me to mellow out, dude, but nope, I am still troubled.
Posted by Sisyphus at 9:15 PM

The name sounds totally jewish to me, first and last.

Meanwhile, yuck. Just yuck. I want this kid in my class so I can fail him. I mean, how are these his initials on the frat house? does he think that is an H? For ASH for Asher? Because that's an eta, dimwit. See there's this other language called Greek and it uses a different alphabet.

You know, I can't really get worked up over this song (other than that i think it's basically lame). But I don't think that this is about the death of hip hop or about postracial hip-hop or something new on the scene. I think that this song is the "college" version of the "high school" party song of my youth (and yes, I feel old as the hills as i type this):

That's right - the equally gimmicky "Fight for Your Right to Party." By the Beastie Boys, three Jewish kids - Adam Yauch (MCA), Adam Horovitz (Ad Rock), and Michael Diamond (Mike D) - from upper-middle-class or some might argue upper-class backgrounds. I think you're right that the "College" song is sanitized hip-hop for the suburban set, but that is exactly what the Beasties' "License to Ill" was in the late 80s. There is, I'm going to go out on a limb and say, pretty much nothing revolutionary about "Paul Revere" or "She's Crafty." Great songs? Sure. But also misogynistic and, aside from Rick Rubin's sampling genius, not terribly musically interesting. The Beasties only become interesting from Paul's Boutique onward. So, will Asher Roth become interesting? Signs don't look great right now, but then, neither did they when "Fight for Your Right to Party" was a hit for the Beastie Boys.

As for the portrayal of college in the song, I think it capitalizes on a Real World fantasy of what it's like to be in college and/or a college-aged person. Now, the Real World first aired in 1992, though I'd argue that it's not until the 1996 Miami season that it really solidifies into the fantasy that I describe above. In any case, it seems to me that this song by Asher Roth invents exactly nothing. Instead, he just seems to be recycling stuff that was super-popular when I was in high school and college.

Only at least when I was in high school and college, this garbage was fresh. Now it's just.... kind of pathetic.

I still can't forgive him for his misuse of the Greek alphabet. :)

What amuses me about this is the notion that hip-hop is this Very Important Cultural Phenomenon. As opposed to basically being a business. So the one who has these furrowed-brow thoughts about it must, ipso facto, be a Very Important Cultural Critic. So yet again, the VICC sits in her high, well-padded chair behind an impressive desk, while poor Culture shivers on a hard little bench, waiting for judgment to be passed. I think the whole idea of the academic CC, expressing avant-garde thoughts "in opposition to" the "dominant" culture, has been overhyped by a wide margin.