I sent off those emails almost right after posting to my blog. It's amazing how some sort of external pressure ---- not even pressure, just public knowledge ---- can motivate someone, eh? I wish it worked for writing too. Well, it works for putting in the time, but it doesn't magically make the writing go faster or more easily, which is what I really want.

So, like I said, last night I sent my emails, and today I turned back to the article. Which is totally not written, barely even started, so I don't think I could put in on my cv as anything but "in progress" any time soon. I may end up playing a big game of chicken with the apps that have later deadlines, trying to get it out so I can send them a cv that says "submitted for publication" instead, but I have bad feelings about that. Ideally I'd just pump a whole pile of apps out in a weekend long before their deadlines come knocking, and that way I'd be able to concentrate on research without missing or dropping every third deadline. So instead I'll probably go back and forth as much as possible.

Unfortunately (or maybe this is the way it's gotta be, I don't know), when compiling my quotes and notes and fifty-seven different potential outlines and questions to myself and patterns I'd noted and all sorts of other stuff, I just put every separate idea in a word file and saved some of them to my desktop. Others I printed out. Others, I printed out but then went back and rewrote or changed stuff and didn't re-print out (but not all of them are like this. Which ones? I don't know.) Others I just left as open files (oh about 2 gazillion open windows on the desktop). Others I saved in my desktop folder I helpfully named "New Article." Others, I suspect, got saved to documents or downloads because I was in a hurry and didn't change the default when I hit save, which means I may never find them again. 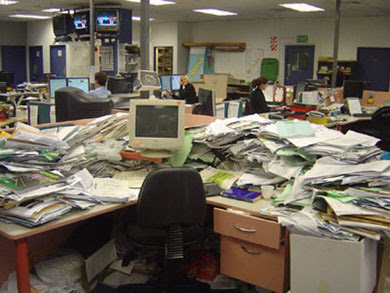 The open files have no titles, of course, where others have such helpful titles as "draft," "draft 8 22," "notes," "revised notes," "what do I think about this" or even just "this," as sometimes I don't remember to create a document title when I save so whatever comes before the first punctuation mark stays (I have quite a few saved as "ok, but" --- well just the ok part, as it cuts off with commas), the names of the people involved, or "thinking." I have quite a lot saved with some variation on thinking, or maybe "thinking about x topic."

So today I decided I needed to figure out what I had and what order it should go in, and ideally also what I don't need in here or what I still needed to get. And people, it was overwhelming. I didn't know where to start. In fact, my brain kept just shutting down from the impossibility of it all. I kept picking up a piece of paper, then putting it down in a slightly different place, then feeling just as unproductive and overwhelmed.

(someone I know posted a great photo of the diss-writing process on facebook, but I don't think I should take it and put it here. Just imagine zillions of papers and notecards and post-its and color-coded tags and ripped-out bits of notes laid out on the floor in some insane, complex form of organization, with the caption: Great---- now I just need to write it all up. Yeah, it feels like that)

So I alternated between cutting and pasting and moving things around, trying to get it all into one central file that I could clean up into prose later, and going and laying down on the couch in a fit of information-overload-inspired narcolepsy. But I think I have a much better handle on what I have ---- or at least I have consolidated my blurbs and files and saved all the old stuff in one place, never to be looked at again I bet.

It's too bad pressure doesn't convert pages of junky notes into prose like it converts carbon into diamonds, or else I could pile all my books on top of my stacks of paper, weight it with a couple OED volumes, and go out and play. Unfortunately instead, I think the proper conversion metaphor for piling up a big hunk of undigested notes under pressure would be compost.

Sigh. Tomorrow I go in to the library to aerate the bullshit.
Posted by Sisyphus at 8:04 PM

The image I had, based on your last paragraph, is of Wall-E compressing everything into cubes and building towers with the blocks. Those piles will probably sort themselves out while you sleep--not physically, but in your mind.

I used to store my files similar to your way - I named them according to the date I worked on them. This used a lot of disk space :)
Now I have a little nifty program that keeps track of all changes and I only need one file. Maybe this could be of use for you as well?

I went through a phase of naming files things like 'Chapter2point3thursafternoon'. This was... not useful!

You know, this process sounds okay to me. Do a little bit, get overwhelmed and take a break, do a little more, take a break; at some point, momentum kicks in and you start really getting things done, with much more time working than taking breaks. I think you're fine. If you want some actual advice, I'd say read through everything, then toss as much of it as you can and start from scratch. It's panic-inducing but often produces a really good piece of work.