I just can't watch Mad Men without thinking of all the ugly crap we have from that time period still sitting around our house. I love the show, but can't get into the time period, and probably because I never saw the good stuff, just the cheap knockoffs after they had been used hard and aged twenty years. And then we still kept them long after they fell apart and are still here. Just like how I associate the 20s with old people in nursing homes, because they got old and never changed from their youthful style. It was kind of a shock when it dawned on me that young fashionable people dressed like that at the time!

Anyway, my parents won't watch Mad Men; they have preemptively declared that it is stupid and inaccurate and wrong. Maybe because it really is so closely about them in some ways, and the show is not kind when it sniggers about how much more we know than those stupid people back then. 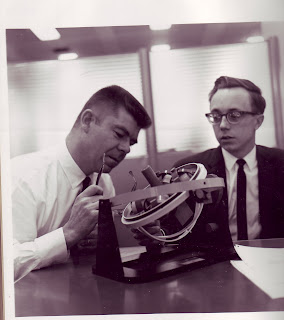 You see, my dad has a similar up-from-nowhere kind of story as Don Draper (although as you can see from his massive forehead and the fact that he looks like he's only 14 that he more resembles Pete Campbell) and as newlyweds my parents lived on Long Island while he commuted in to Manhattan back in the late 50s. He did military and space stuff, though, so he fits more the Cuban Missle Crisis plotline than the ads. They have also told me that people were not actually paying attention and didn't take the crisis very seriously, and that they are futzing it all up on the show to make more drama. Also, funnily enough, my mom loathes John Kennedy. Being mom, she has this tendency to make universal pronouncements, so of course she tells me that the show got it wrong and rather than having a shrine to Kennedy, "all Catholics loathed Kennedy. He was too slick, too untrustworthy." 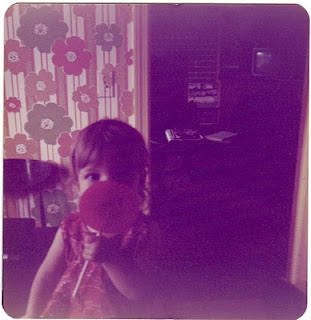 I didn't bother to adjust the colors on this pic; it's faded, but faded in a completely different way than it has scanned. This long-promised wallpaper photo does not deliver the promised shock, as it doesn't get the full neon-yellow and avocado green color, nor is it the really psychedelic wallpaper I remember. It does show you though that there were two sets of wallpaper in the kitchen, because the green barns-with-talking-mushrooms pattern was over the side with the sink and window. Don't forget the avocado-green shag carpet. In the kitchen. This is probably my all-time favorite childhood picture of me, by the way. That would make it around 77 or so. 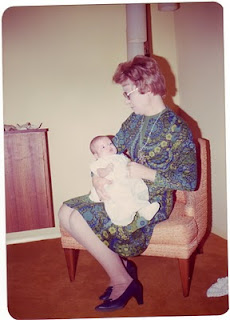 And this would be me after my baptism. The hi-fi and chair still date from the late 50s/early 60s, though. We had them until the mid 80s --- they really clashed with the half-done-over living room in oak and desert pastels. I remember looking through the phot album and going in phases from hating my mom's dress to loving it to loving the kitch of it to hating it. The next picture in the album is hilarious though, with my step-grandpa holding me and he's got greasy slicked hair, sideburns, a leisure suit and shirt mostly unbuttoned. It is amazing how everyone had to look skeevy in the 70s. It was like a law or something. God bless 'em. Just don't bring them back in a revival tv show.
Posted by Sisyphus at 11:26 PM

I love the hi fi cabinet visible in the corner of that picture! The wallpaper and the carpeting: not so much.

I really like Mad Men, in part because I do like many of the furnishings (more than the clothes, for the most part, except the hats). Like yours, my family has some similarities with Dons: living on Long Island, commuting into "The City" (though for a far less stylish kind of job). Moreover, my parents are probably exactly Don & Betty's ages; my older sister was born the same year as their daughter; my brother was the age of their son.... and when they have a third kid (I don't think that's too much of a spoiler) it's born when I was. I find the whole portrayal fascinating.

I haven't seen Mad Men, but my several people in my department have a Mad Men group and get together and watch episodes once a week. I just read Historiann's posts about MM.

My mom and stepdad's memories of the Cuban missile crisis are walking home from school during bomb drills (country miles) and hiding under desks. They were both sure they were going to die. I imagine kids handled that very differently from adults. And I imagine location matters--they grew up near a research facility that was "top secret" at the time which made the area a military target (now totally not secret, well, most of it).

I want that lollipop. That's all.

Thanks for the pics.

Well, as someone who was a kid during the Cuban Missile Crisis, I can saw WE paid attention. I remember watching JFK's speech, and asking if we were going to die. I knew someone else who, with his wife, planned how they get into the car with their children if the war started, and commit collective suicide. So: some people were paying serious attention.

And that wallpaper is awesome, while the print on your mother's dress at the baptism is, well, quite astonishing. Fortunately, I don't have any pictures of some of my more psychedelic clothes from the early 70s, but they were, um, electric.

What, nobody loves the absolutely stupendous old-timey gyroscope? You can't make rockets and bomb the commies without them!

My parents are, I think, a few years older than the Drapers? They got married in 57 or 58, I think. My sis was born in 62, so the ages don't quite match up right. There might be something about being an adult during the missile crisis vs. being a kid --- as my dad just told me, even though he helped design rockets that would hold nuclear payloads, there was something dreamlike and unreal about the whole prospect that never actually felt like they would ever be used. Of course, people who work in defense may have to get into that mindset in order to live with themselves.

I wish other people would hunt up some of their Mad-Men era pictures and post them too!

dude, I just got back from vacation and here you are with a postdoc! so, super mega congratulations.

and, awesome wallpaper. My childhood bedroom had psychedelic rabbits (left over from the previous occupant), so I can relate.

Susan, I so wish I could see photos of your "electric" clothing. I wish I had some of my own older ensembles -- now I buy that stuff in thrift stores and mix it up with newer pieces.

Love the pics and the flat-top hair. I had a high school teacher who still had the flat-top though it was a long, long time after the era when your pic was taken. I used to wonder if he balanced a level on it every morning.