I went and hung out with the postdoc people, as usual, last night, but drank way more than I usually do. I don't usually go more than a couple beers, but the Friendly Yet Creepy characters hereabouts love to buy rounds as part of the conversation, and supplement with what's in their flasks. I didn't get sick, but it was bad enough that when the party broke up I commandeered one of the poor postdocs and insisted he walk me home instead of ride his bike, and then I sat around and talked with him and we traded funny youtube videos for a couple hours until I was sober enough to walk back and drive home. I think he may have been annoyed. I don't think guys really get that the crazy and entertaining characters who invite themselves to our tables are hitting on the girls and are waiting for any opportunity to bring someone home, which means waiting it out for a couple hours at the bar to sober up isn't an option.

See, this is why I wish I lived within staggering distance of the other postdocs. Of course, that could just mean I'd have to deal with strange people trying to follow me home when I left the bar. Meh, the whole situation just blows.

Anyway, when I woke up, I did not have a hangover, but I am so tired. Going to bed at 4 am will do that to you. I only just now started to get my energy back. I have done nothing all day, barely making it through 50 pages of my reading. And I haven't done anything related to my online class or packing or planning. I did, however, finally clean the catbox just now. So the day isn't a complete waste, I guess.

What I have been doing is sitting around on the couch, giving myself a terrible neck ache, staring at paint color swatches and sample room layouts, cause someone is decorating and got me off on a whole new tangent of decoration procrastination.

I have stared at so many different styles and rooms and things that I have no idea what I like anymore. And I have an open space above my tv that I think needs something, but I can't figure out anything I like that I am willing to pay for, especially considering that I hope to move next year off to some wonderful tenure track job. I finally decided I may just cover some boards or cardboard in a brightly-printed fabric and hang them. Not that I have the energy to actually go do that, but we'll see about later.

Anyway, I saw this randomly (it is from West Elm) and quite like it. Which is funny, since it's not really at all my style. 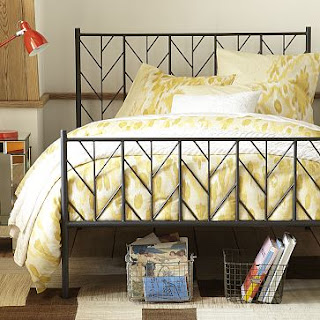 I like the strong geometric lines, how they're sorta like feathers or trees. Modern, but not that too cold and sterile modern that people are always loving. By the way, everyone seems to be obsessed with white and gray as the new fashion decoration colors, and when I look at them I just keep thinking of how Betty had her living room redone in those very odd and cold "sophisticated" colors of gray and silver and ugly yellow on Mad Men. What season was that?

Anyway, I like that bed, but think it is silly to buy a new bed (when I have no money) and then have to move it to whatever new place. But I know it will be nowhere to be found next fall when I was moving in to a new place somewhere else and actually had a real paycheck. Oh well, probably for the best, since I have no idea how to decorate around it.

(anybody want to join me in a decorating discussion? Am I the only person who feels like there's this matchy-matchy rule where absolutely everything must be one of the main room colors? Not like it's a rule, but more like an OCD or paranoia thing.)
Posted by Sisyphus at 3:33 PM

I'm going to have to buy a lot of new furniture when we move because we're getting rid of so much. In a way, that's really fun and exciting to think about. But it's also going to be a lot of money. I figure, though, that it's time to buy some real furniture instead of having all thrift store merchandise.

The funny thing about new versus used, though, is that the one "nice" piece of furniture we had was our couch -- nice dark brown leather -- but our kids destroyed it within two years of buying it. Turns out, the leather was very poor quality. However, I have a thrift store leather recliner (real leather!) that is likely 20+ years old, and it's still going strong. That's one of the only thrift store purchases that's making the cross country trek.

I like the idea of redecorating. It's doing it and spending money that's the bother. hmph.

Word verification: outofie. It must know it's me who's writing this...Fie!

Well if you need an interior decorator, just call me! ;)

Don't be matchy-matchy -- colors are too much fun to pick just one!

I *want* to not do matchy-matchy, but I get so *anxious* whenever I try. Just like wearing patterns ... I don't know what it is about it. 'Cause I love huge, patterned, loud, non-matchy bright stuff in theory. I just get paranoid whenever I actually try it.