I am so freakin' frustrated right now I am going to procrastinate by ranting here on the blog. Argh! Aroough! Grarrg!

Anyway, to back up a bit, I watched at National Geographic show all about Big Sur last night (which I probably shouldn't do while I am homesick for California, but oh well...) and was struck, once again, by how appropriate my metaphor of Floyd the article really is: 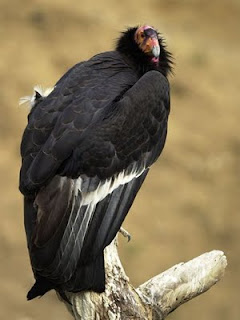 I mean, look at it. It's big, ungainly, and slow ---- slow to grow up, slow to reproduce, and have I mentioned kinda stupid? --- but also kinda awesome and amazing in its own ugly way. And endangered, because it keeps flying into power lines and crash landing when learning to fly. (As do the red-tailed hawks we heard about on the program, but they lay more eggs and lay them more often.) And currently the released condors fly right by naturally-existing carrion because they still rely so heavily on caretaking from human scientists. I mean, if that's not a great metaphor for me and my writing, what is? 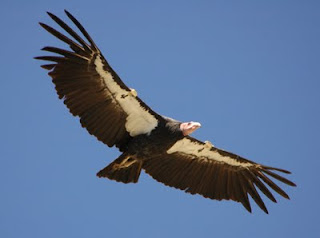 Check that out. Don't you just want Floyd to finally be able to spread his wings and fly? That's so cool. And he has tags and a GPS! Because that is just how we roll in a state so up on our technology, even the birds have techno-bling. Either that or I need to make a crack about navigating all the damn freeways.

But, ok. I have a very long draft. I also just read over my main section and it's just --- a bunch of paragraphs. I think I have been so busy writing paragraphs --- or actually, motivating myself to get past stuck spots in the article by allowing myself to have tunnel vision and just focus on fixing one sentence or integrating one critic --- that I haven't been able to create a coherent throughline or direction from one end of the section to another. It's a mess and I don't know what to do with it. There are paragraphs that I no longer know why they are here, paragraphs with the topic sentence buried in the middle (ok, easily fixable), paragraphs that I have this vague dissatisfied feeling of "that doesn't belong there" but I don't know where it does go, and one of my main argument terms drops out halfway through the section because a lot of the examples I use don't really technically consist of the main term I am arguing about.

That is to say nothing of the paragraphs that go on and on at length explicating every single instance of my pattern (like the repetition of the color green, for example) because the language is just so pretty. Sigh. I know I need to be ruthless about that, but it kills me.

There is just so much wrong with this section --- and I'm not even looking at the whole article at the moment --- that I don't really know what to do. I'm overwhelmed. Where do I start? I think I need to go back through it and ask, after every sentence and paragraph, the dreaded teacher question, "so what?"

I went through and reverse outlined it, then I went through and wrote out keywords next to each paragraph, and I still don't really know what to do. I still can't even really articulate what is going wrong in some places, much less how to fix it. It's just a bunch of discrete paragraphs instead of an arrow shooting through the heart of an argument and dragging the reader after. Hmh.

I'm so tempted to just procrastinate more and go fix some word choice and citation problems, since I know how to fix those things, but that's just going back to fixing individual trees when the problem is there's no path through the forest. Have I used up my entire allotment of metaphors yet? This blog might explode from an overload of metaphors. Anyway.

You know, I hope the academy has room for people like me in its ecosystem --- that it hasn't become so competitive only one type of scholar, the fast-writing quick-thinking least-publishable -unit scholar, can get a job and tenure. Because I think there is value in a diversity of approaches, of methodologies, of writing styles, in the academy, even though I can't really justify why at the moment. Just like when people ask, why do we need even condors when turkey buzzards fill the same niche? I dunno. We just do. Something is impoverished when we're all the same. Even if some of us have an unfortunate tendency to eat tractor parts and fly into power lines.

Different context, but your post reminded me of this article: http://www.nybooks.com/blogs/nyrblog/2010/mar/09/britain-the-disgrace-of-the-universities/

I share that sense that there should be a variety of methodologies, and the unease about how to justify it (especially since I've got a vested interest there). I can see it'd be difficult, if you're on a hiring committee, faced with a choice between superproductive person, who does great work, and person who hasn't produced as much yet, but seems to have the potential to produce great work, you might be hard put to justify going for the less proven candidate. But it does feel like there's a terrible loss somewhere down the line if there isn't space for people who think and work differently. Condors are worth keeping too. Good luck with Floyd!

Well -- to be fair -- the slowest writer in my grad school cohort is the most successful, because her work had so much meat on its bones.

Sounds like you need time AWAY from Floyd the article. I can only revise if I've completely walked away from the thing for several weeks.

I'm a slow writer myself, and I produce horrible first drafts. Hang in there!