Uh, is it June already? I already blew my first self-imposed deadline, which was to finish revising chapter 1 of the book manuscript. Heh. That was wildly unrealistic. I'm not sure I can even promise to get through it all by the end of the month when I head off to mom and dad's. This is discouraging, as I know I will not have revising time in the fall, what with four classes and the job market, and yet I really wanted to be able to say on the cv that the manuscript was out at a press. But, it is what it is. I can't look too closely at the timelines and the amount of work that needs to be done without becoming discouraged and quitting, so blinders it is! 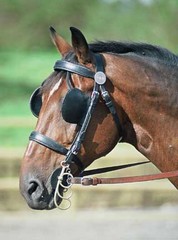 The problem is that clearly this is the worst chapter of the dissertation. It is the first chapter, and I didn't really know my argument yet. Worse, I didn't really understand how to insert myself into the scholarly conversation, literary-wise (I have copious citations to prove everything historical including proof that the year I am discussing actually happened --- well, almost that extensive of overkill), and what's even more horrifying, I did a shoddy job documenting that conversation. It's not really clear from my chapter where I am engaging with other peoples' arguments, particularly where I was obviously inspired and riffing off of someone's claim. So, agreeing with a little fillip of difference. That is becoming clear to me as I go back through my booknotes for these critical texts and I am very worried, so I'm having to go back to the actual scholarship and reconstruct. It may be ok, if unclear, to have a sudden rant about something in the chapter without explaining that it is a vehement disagreement with X or Y critic, but a passage of brilliant insight that is not acknowledging that it is very closely drawing from W or Z critic is, if not plagiarism, not acknowledging that one is standing on the shoulders of giants.

The problem is, who remembers what submerged affiliations and arguments one was having with criticism back in 2003? Not only am I having to track down and read tons of crap (well, interesting, well-written crap) that people published at the end of the 00s (despite my telling them to STOP PUBLISHING ANYTHING ALREADY --- see), I am combing back through the "classics" and criticism that I had already grappled with once. Ah well. It will be a better chapter for it. It just has to be done. (And to say, "well your first dissertation chapter just shouldn't have sucked, so there!" isn't really realistic either, now is it?)

And it shows what I was terrified about actually pulling off --- the historical background --- and not, because I didn't cite a single critic unless they used the word "nosepicking," which was pretty much nobody when I first started with this author. The idea that I should acknowledge the people who shaped my general understanding of the text? Totally absent from the footnotes. Heh.

All of this reviewing is complicated by the fact that Postdoc City doesn't have much of a library. So I ILL a lot, and then get caught up in something else, and then it is the weekend and the library is not open, and etc. etc. I can't tell if this is significant or not, but Postdoc City library seems to have a lot of Peter Lang, Edward Mellen, and Palgrave books published in my field. I don't know if this is saying something about University presses no longer publishing books or edited collections in my field or and these presses are taking up the slack or if Postdoc City college has just decided that it's not fancy enough to order the snazziest of scholarly tomes, but it's interesting. It's also kinda heartbreaking to see that consistently, the articles in these edited collections that I find most cutting-edge and interesting are by people listed as postdocs or lecturers or postgrad fellowship people in, say, 2007 and 2008, and looking them up now, none of them are in tenure-track positions yet. Yeah, I'm not going to think about that too much either. I'll just slap some blinders on my blinders there.

Probably this says something about getting back in there and revising the dissertation immediately so you can send it off to a press without having to do a ton of catch-up work to get it up to date, but I can totally see why I reread this chapter and went ick! and decided to procrastinate by writing and publishing something else (to be fair, I also decided to quit academia twice and decided to spend 4-5 months of full-time job searching each time, and just never landed anything, so the timeline for graduating and revising the book is complicated). At least reading all this new stuff that's come out is fun. I think I have made it through all the book-type material now and will now switch over to articles. I prefer reading print books, definitely, and yet whenever I click on the "get article" button and it points me to Postdoc City's physical stacks instead of a scanned JSTOR or Project Muse pdf I groan: what, I have to go on campus and find that now, and then figure out how to either copy or scan it? Bleargh!

Anyway I think now I will eat some leftovers, and then try to stir some of this criticism into my chapter (without having it make a big mess like when I try to stir berries into the cake batter) and then I will go to the grocery store. Just like I hoped, the next coupon they sent me was for blueberries!
Posted by Sisyphus at 10:05 AM

Start with the blueberries and proceed from there. *patpat*

It seems to me, based on what I've encountered elsewhere, that the first diss chapter, with all the lit review bullshit, has to be cut down significantly for book purposes. My first reader had a raft of criticisms to that effect. We get so used to documenting every goddamn thought in our heads that we forget that book readers don't want to be hit over the head with that stuff. They want to be charmed, not corralled into buying your argument.

My advisor had me do a really different format, wherein I had basically five separate case studies, each one connecting a different type of historical phenomenon to a different kind of literature (using a different theorist too --- huh, I wonder if that's gonna be a problem) and they are only linked in terms of the main topic. I don't really have a lit review chapter.

Or maybe I have 5 separate lit reviews, each one reviewing the criticism and parsing the theory in a more practiced way?

My diss must look really weird compared to other ones out there.

I'd ignore the diss chapter and write something that introduces your book. So while you situate the work (theoretically, historically, in terms of existing scholarship) that is done not to prove you have done your homework, but to provide a framework for what follows. It's a subtle but important shift.

A different version of what Dr. K said.

What they said...but definitely start with blueberries!