The other day I went to our local art and wine festival. There were crafts. There was (presumably) wine. There was a "food truck alley" where you could buy tickets for meals and the money was split between a bunch of local charities. Alas, my taco truck fajitas were kinda crappy. Perhaps I have been spoiled by the gourmet-food truck phenomenon.

I was walking around seeing the sights with my sister (who doesn't drink --- hence the lack of knowledge about what might have been served there) and we admired various crafted objects and mocked others. There is something about a local fair that really brings out the tacky in terms of crafters. Perhaps it is market driven ---- ie, people turn out in large numbers to buy incredibly ugly clutter. We usually find something for my sister-in-law, since anything covered with flowers and several non-matching country-style prints is right up her alley. We found a nice pressed-flowers picture in a frame and got it for her. Then once I got home I remembered that I had just bought her a Christmas gift when we went to Tourist Town. Dammit!

The art fair also had one really depressing wing on one street, consisting solely of local business selling dental work, window installation, and various homeowner services that you don't really want. I was glad they were segregated off on one side street (because, hello, how are you celebrating arts or crafts?) but it was a very depressing street to walk down, since everyone there was giving the hard sell and there was no one really around but us.

The highlight of my day was when we were walking down a more appropriate street (they did have some nice jewelers there in addition to tacky ones and the ones who hot-glue bottle tops on to string) and we saw some cool kitchy posters, like the old help-the-war-effort posters, except they were for urban farming and organic gardening. Cool. When I went over to ask for a postcard or businesscard, the woman interrupted me and asked if I needed a chicken tattoo. 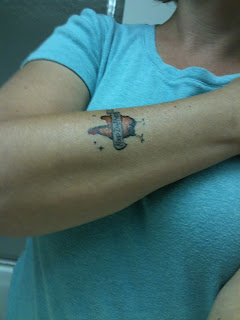 It says "Keep 'em Flying!" but my sister and I had a discussion about whether that should actually be frying.

Anyways, you need to know your chicken, obviously, and so I will end with this completely incomprehensible video from the great 90's band Cibo Matto (go find a diff video with better sound to really get them):

OMG, I was also recently at a local arts fair (not *even* arts and *crafts*) and there was So. Much. Ugly. Crap. What gives? But I did find good photography of local industrial sites and bought a food-related one for our kitchen (or rather, for the hallway entry into the kitchen, because *nothing* is allowed in the kitchen that is not functional kitchen stuff -- it will remain a pristine temple to cooking) and a technically nice, but artistically boring trio of pen and ink drawings of the cool WPA-era buildings on campus in which I have had my offices, and a fab purse and pair of earrings (the fiber and jewelry arts/crafts are always the best). But to get to them, I had to pass "bottle art" for the garden and hideous neon paintings of the Beatles and Jimi Hendrix. Gah!

Also, the food trucks at our fair were selling kettle corn and lemonade -- no tacos for Rust Belt!