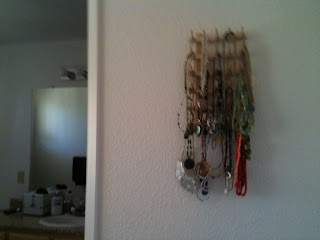 Operation Jewelry Hanger was a partial success, unlike Operation Create Desk Accessories, which failed miserably because they look lumpy and amateurish and the black duct tape I used to edge the little holders has come up unevenly in places. Sigh. I just need to come to terms with the fact that I have very high standards for my crafting and very little patience, which means that stuff turns out shitty and I get super mad.

What you see here is a spool holder from the fabric store. It was on sale for 5.99. The necklace/jewelry holders I saw there were running about 38, so that is good. And most of the other ones I have seen are either pricey (like on etsy) or incredibly cheap and plasticy. If I ever get up off my ass I might find some paint and paint this a cool snazzy color, but for now it is good enough that it is up on the wall.

Most of the necklace holders you see are more horizontal or the pins are set out diagonally, so the necklaces don't cover each other up, and I admit that makes this not as useful as I'd hoped. Also, there are a whole lot of holes in the wall behind that thing, because I can't be arsed to check whether both holes are in a level line with each other. Stupid me.

I hung it above my head, so the bottoms of my necklaces are about eye level. I hope that they are high enough not to interest my cats, who sometimes like jumping for things and destroying them. Also, Timido is an eater of string, so I don't want him to ingest any of my necklace chains. 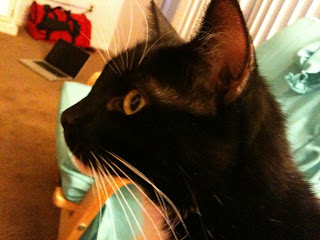 
It is nice that I can --- mostly --- see them and will probably be wearing some of them more often. I have untangled all the ones that were so hopelessly tangled they just stayed permanently in my jewelry box. Lots of them are very tarnished, too, and I haven't done anything about that. Any suggestions for the best way to polish them if they are a mix of silver and beads?

Funny thing how these are like the equivalent of looking through old photographs --- something else I have been doing. A lot of these I wore constantly in high school and college. I had a friend I went off to college with who liked beading and who made me a bunch of chokers, some out of broken bits of my mom's old costume jewelry. There's also the key I randomly bought at an antique store for a dollar and wore on a long velvet string with my fluffy 90s poet shirts. Some of the more recent ones I might get rid of because I am just tired of looking at them or thinking about them, but, oddly enough, not my totally outdated high school stuff. Do you wear the same cheap jewelry for years upon years?
Posted by Sisyphus at 7:31 PM

Totally unrelated: thanks for the comment on Fie's post about humanities assignments, in which you suggested I-pod playlists for characters. Did that in class with the frosh today. Awesome. We all had fun.renewsp

Sorry, that was part of the captcha going in the wrong box.

So what would Beowulf have on his ipod?

Well, we were doing "Culhwch and Olwen," so I still don't know about Beowulf. And it was just class presentations, not writing. But they loved it.