For all your academic amusement needs:

Please go check out Acadamnit. I can't get his site to let me leave comments so I'm granting kudos via my own humble blog. I had been meaning for a while to point out his funny post on Instructia (R) --- 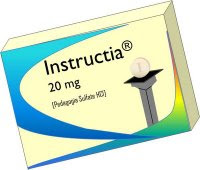 --- which I was going to endorse as almost saving my life (truly, the energy level it brings is magnificent) until I had the unfortunate side effect of being unable to stop preparing my PowerPoint lecture for over four hours and had to be rushed to the hospital. Now they have me on a cocktail of Lector (tm) and 50 mg of Teachitrol (tm) which, while it works, hardly provides the same euphoric rush, the joy of academe, as Instructia did, sigh.

But anyway, Acadamnit. He has more posts up and they are also amusing. Go seek out some funny, for funny there you will find.
Posted by Sisyphus at 3:17 PM

Ew, sorry about the trip to the hospital (you must not have washed it down with alcohol, take it with a stiff drink next time). Thanks for the kind words Sisyphus.

I've had a couple of folks mention problems w/commenting...not sure what the problem is but will investigate.