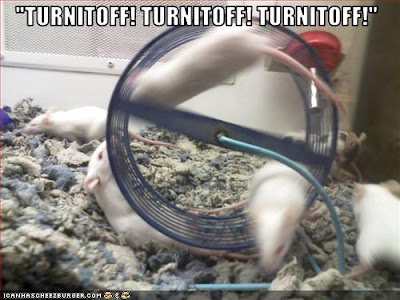 (from icanhascheezburger, of course)
Posted by Sisyphus at 2:25 PM

Well, that was depressing. I thought it wasn't suppose to be up until Friday. It seems like some positions I've heard about in my area (which were suppose to be on the JIL when it came out) weren't on it. Maybe there's more to come by Friday. I tried to search one state for all jobs and it showed no jobs in that state. That can't be right, can it?

K8, never bother to use the search function. At least whenever I do, I miss a lot of jobs. Just comb through the whole damn thing to make sure you aren't missing anything.

I doubt that they will add more new jobs before Friday, but they will update it with everything that doesn't make it by the deadlines every Friday after that.

And never doubt how sucky the job search can be when we're still in the middle of a recession and academia itself is circling the toilet.

That's actually marginally better than last year, if you're an Americanist. If you're not, well, it's only about an hour, so I haven't dug through everybody's disciplines yet. Most likely, it does suck to be someone right about now, and that someone has my sympathies.

Oh, I originally searched by discipline. Then, out of curiousity, I wanted to see everything in my home state for all areas. Not much. So, I tried a few surrounding states. A few had none. These aren't small states, so that's why I wondered. I'm aware of the very few jobs out there and the fact that a few will be added later, but for a whole state to have 0 job openings in any area seemed, well, odd.

Wishing you good things this year.

well, the whole west coast is frozen this academic year. If you want to be really depressed, there's a thread on the chronicle boards where people point out which state legislatures have frozen hiring. Fun!!!