I notice that Inside Higher Ed has linked to my shabby little post about the UC budget protests, along with this post by the Itinerant Professor, who makes the argument that raising the tuition by 32 percent isn't such a bad thing. Humph. Excuse me while I take a few moments to attack his argument, point by point.

The first point he makes is one that I've seen around the web elsewhere, which is that the UC system is actually cheap, even underpriced, compared to other public universities:

If my calculations are right, this means that fees next year will be in the ballpark of $12,560 for resident undergraduate students, certainly a large dollar and percentage increase over what students are paying this year. But where does this place UC compared to other public universities? Each year, the Washington Higher Education Coordinating Board produces an excellent report summarizing tuition and fee rates at public universities in every state. The most recent report is for last year, and shows that Berkeley's rate of $8,932 was 12th highest in the nation for public flagship universities - but still $4,774 or 34 percent below the most expensive public university in the nation, a distinction held by my own institution, Penn State - University Park.

Looking at his report, which is indeed very handy, I notice that The Itinerant Professor and others who talk about "peer universities" pick and choose their "Universities Of" ---- Michigan, but not Arizona; Virginia not Washington; Connecticut but not Colorado (to look at some other "UCs.") These Western schools are all much, much cheaper than California. As a Westerner before I was a Californian I'm kinda miffed at this weird East Coast bias. Are these "peer schools" really and truly so much better quality than these other, Western "peer schools"?

Also, I don't get how responding to "higher education has gotten too expensive and out of reach for the average family!" with "yes, but it is comparatively less out of reach over here at this one school system, which therefore should jack up its fees" is helpful in any way.

tuition prices at Penn State and the University of Vermont this year, for example, are already over Berkeley's announced rate for next year. But there is no doubt that Berkeley's announced increase will move it up in these dubious rankings. Tuition at the other UC campuses is generally lower than at Berkeley, but still high compared to peer institutions.

Umm, no. This is totally wrong and I'll stop you here.

Unlike many other university systems, there is only one University of California. Although Some People (lookin' at you, "I go to Cal" people) seem to think that only Berkeley is the "real" University of California, in fact, it is one university with 10 campuses, as per the Master Plan. There is no "flagship" and "branch" system; we are one systemwide university. In fact, you could consider all the CSUs our "branch campuses," as they fulfill the mission typically ascribed to those types of schools.

So when we look at the UC System website, we see the statement that "Undergraduates pay the same UC systemwide fees at all campuses. Other expenses will depend on the campus and living situation."

Now I will ask the tough and evil question: as this guy says, people are willing to pay any amount for a Berkeley degree, and to some extent for UCLA too. He justifies the fee hikes because they will pay off in earnings and prestige. Ok, but what about the other campuses with the same sticker price? Is, say, Riverside or Davis "worth" the same? Do a Santa Cruz or Santa Barbara degree have the same earnings "payoff" as a Berkeley one? Especially when you consider that nobody but me appears to remember this whole California Master Plan business with the systemwide university thing.

Do I want to go to a "tiered" fee plan and an officially tiered campus system? No. Do I think parents and prospective students should think about this long and hard before applying and keep this in mind when they plan what to do about proposed CA fee hikes? Yes.

And then The Itinerant Professor goes on to point out all the Pell Grants, Cal Grants, scholarships and the new "Blue and Gold Plan" which will make the college insanely affordable yada yada yada. I would find and link to the recent articles I read about Pell Grants (which currently max out at around $5,000, btw,) under threat of being cut back or made more difficult to get, Schwarzenegger talking about eliminating the Cal Grants program, and other financial aid woes, but it's late tonight and I'm tired. Suffice it to say that I am dubious about these forms of financial aid because everyone compares them to the fee rates and says, oh, well that will be all right.

But when I was an undergrad I worried about all this:

(I tell ya, it's the asterisks that kill me. Gotta love them.) Yes, the fees are a huge chunk of costs, but the UC campuses are not conveniently placed in low-rent areas by any means, and those students in the math and science disciplines are now often paying 300 a pop for a textbook and buying multiple books per class. I went to UC for undergrad back in the 90s when things were much cheaper and students organized to fight back fee hikes the whole time I was there, and yet I still remember having plenty of friends who got in huge messes because the bursar didn't disburse their financial aid in time for them to enroll, or deferred payments and made it impossible for them to pay rent, and other terrible snafus.

And how does the UC expect everyone to pay for all this estimated 26K, anyway? Well, let's look here: 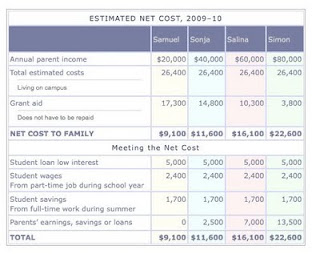 Hmm, I see that this plan expects everyone to take out 5 grand in loans this year, in addition to working both during school and the summer. You had better get a good job to save 1700 over a summer, kids! Better move back home because UC expects you not to have to spend most of what you make in the summer supporting yourself on the exorbitant rates in the student ghettos. Ooh, and what about if you couldn't get all your required classes because they filled up because UC fired all its lecturers and closed sections and you have to not only not just work and live in expensive housing near campus but also pay through the nose for the jacked-up summer school fees! Ooh ooh what then?

And to go back a moment, I'm still struck by the idea that what the UC thinks is "affordable" to a family that makes 20 grand a year involves them taking out 5 grand in loans. For one year. Presumably more in future years as the fees continue to go up. So we're talking 20 grand in loans if you graduate on time --- ok 25 since no one can get classes right now (who does it in four years these days anyway?). And they are claiming that poor families should not be put off by the thought of borrowing the equivalent of a nice car or their entire year's salary?

I won't even begin to address the point about what it means for our students' concentration levels and ability to read and think and do well in our classes if they are working part time and during summer. But if you were wondering why our students plagiarize, and don't do the homework, and don't read for class...

Plus, this chart doesn't do much to prepare a family for the reality of fee increases in the future. Like I said, the UC didn't raise fees for most of the 90s, which I agree was probably not the right decision (they should have raised it 1 or 2 percent each year to kinda keep pace with inflation, I think.) And then, around 2001, I think, they jacked it by 20% several years in a row. I'm not sure, as I was following graduate fee increases, which went up something like 23, 40, 20 over that time, and was too busy being pissed off at that.

The fee increases are consistent with those recognized in Governor Schwarzenegger’s 2007-08 state budget, and in line with the compact between UC and the governor, which includes a provision for regular annual fee increases.

Ooh ooh! We had an agreement with the governor to accept massive cuts to the UC in return for the promise that fee increases would be small, regular and predictable? And the governor has just pissed all over that compact?

Maybe this will explain to The Itinerant Prof why we're all holding rallies and occupying buildings over here.
Posted by Sisyphus at 10:52 PM

Yes. As is the level of civilization.

And then there is Merced. No one even knows where we are, except when Michelle Obama comes. Our costs are higher (because campus fees have to pay for building a campus, and there was nothing here 10 years ago other than a golf course) but I know everyone expects us to be the cheap campus.

And in answer to your question, it's not affordable, and assistant professors who are sole earners qualify for the Blue and Gold.

A reinforcement to your argument that citations of *other* state universities are arbitrary and irrelevant: Penn State, as referenced by your critic, is NOT truly a state school, as the bulk of their operating budget comes from non-public funds. Working as I do at one of the REAL state universities of Pennsylvania, I understand that even our approx. $5,500 annual tuition is hard for many to scrape together. And that figure comes in far below Penn State, Pitt, and Temple, the semi-publics that get so much attention and to which your critic feels California should align. To apply that poster's very logic, I would have to argue that California University's tuition will be below 6 grand next year, so what's the beef. But I'd be talking about California University of PA, another REAL state school not in State College.