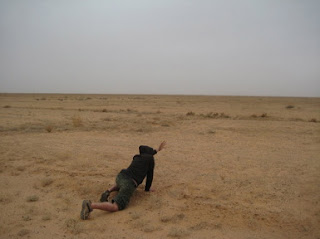 Oh people who are used to semesters, how do you make it through? I am accustomed to the teaching equivalent of speed dating, where you get to hand off all the problematic students, jerks, people who are frustrated with you, and pretty much everyone else, every 10 weeks. Sure, you can't teach revision in that sort of a time period, but it means that by the time the honeymoon period has worn off, you're in the middle of crunch time and can see the end. Maybe you have more grading that way, but you also have less chance to get tired of your students and their writing tics. And likewise they have less time to get tired of you.

So we've done two essays and gone over all the elements of an essay by now. And we're ---- just a little over halfway through. Siiiiiigh. What the hell am I doing for the rest of the semester? Not teaching research, because my office mate decided to make the third paper a research paper and came back from the library session about to cry and wondering if she could completely change the essay directions in the middle of the process. I'm so glad I don't have to teach that and they will get a whole semester of that in the next class --- she says they were incapable of navigating the library web page and were incredibly hostile about their own idiocy around technology. And besides, it's not like my students are suddenly better writers, so I'm sure there's plenty to work on in the second half. It's just I'm not completely sure what.

It feels to me like if my students can't develop a blatantly obvious statement into a claim worthy of defending, then more practice and reviewing the same ideas about analysis aren't going to have an effect. There was a measurable change in certain students who had no clue what an academic essay did or sounded like; once I explained it to them, they said the equivalent of "aha" and then reproduced it in their essays. Then there's this other population of my classes that is not comprehending argument, recognizing it in our readings or peer review, or able to produce it. It does make me feel as if there is something to that "you can't teach writing" thing. Or maybe it's a "you can't teach critical thinking" thing. There were students who did get it but had never been told "it" before, and students who still just don't get it. Hmm.

So is this just, I do more and more of the same, teaching the same concepts and having students either write something I know they can do or can't do already? Sounds boring --- both for me and for them. Maybe if I had structured the whole semester sequence differently and hadn't worked through all the parts of an essay by now. That would require special types of early essays, though. Still pondering.

The good news, though, is that they all can write an essay paragraph, if you tell them to, that uses quotes about 80 percent correctly. --- The problem is that it is a different 20 percent messup for each person. If I hadn't been so under the gun trying to get through all the damn essays I would have left some notes to myself about what aspects of quoting they were getting wrong, and then tell them that they are getting dinged extra for not fixing these specific problems in their next paper. As of now I'll be telling them that but actually be bluffing. The other problem is that if you do not specify, explicitly and by shouting multiple times, that the paragraph needs to include quotes, they will go right back to their merry little evidence-free ways. Like just the other day in class. "Wait," they say, innocent eyes as big as anime characters, "you wanted us to put quotes in this paragraph too? Are we going to have to use quotes in, like, every paragraph in the next essay?" Like it says on the top of the handout, kiddos, pick the quote you think best shows X is being unethical and write a paragraph explaining why.

Then there was this little group in one of my classes, sharing stories --- basically reverse bragging --- about how little work their friends and significant others were having to do in other English classes. I have to hope that they were one-upping each other and this was not true, otherwise I'll just have to explode. Or implode. Or maybe just dry up like a raisin in the sun. Not sure which. One student said her boyfriend has only had to write one of the four long essays so far, and another said that his friend's essay was about which Dr Seuss book influenced him the most as a child. No quotes or evidence was required, I'm assuming. I ask you: what the hell??? Writing crap opinion pieces with no evidence or quotes or relation to any sort of scholarly community is going to help prepare you for your history or psychology or sociology class how? How does blathering about shit you've already made your mind up about help you to analyze problems or sift through evidence for reliability? Meh. I tell you, my students may be writing crap thesis statements like "everybody has their own identity," but at least they can write a semi-coherent paragraph about how two of our writers struggled to overcome adversity. With quotes. I said yes, with quotes, damn you!

Sigh. It's gonna be a loooong trek to the end of the semester. 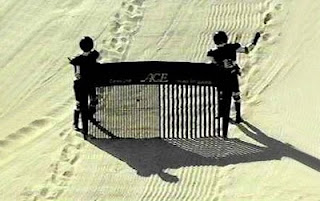 (Sisyphus and friend combing through student prose for some analysis. In the words of the immortal Spaceballs, "we ain't found shit!")
Posted by Sisyphus at 1:13 PM

Psst. The thing that's great about a 15-week semester? You can do something around week 11 where you tell them you understand how tired they are and so you show a movie that week. And doing so is actually good pedagogy because they really will work better for you if you give them that break, and learn more, etc.

Aside from that, though, this is a reason why so many of us are probably fans of conferencing, too. There is time in a 15 week semester to cancel two full weeks of class for conferences. Obviously students have work to complete during those weeks, but really, meeting for class isn't totally necessary.

In other words, semesters, while long and sometimes interminable seeming, do have things that rule.

PS There is a middle ground between what you're doing in your class and what your students are reporting about their friends' classes where the truth probably lies, but, seriously, there are people who are letting them write essays about Dr. Seuss and not use quotes. And those students will show up in your lit classes and so you'll need to teach those ones all the comp stuff, even though they've already had comp. Welcome to my world.

As usual, Dr Crazy is full of good thoughts. I'm struggling with an 8 week term that started in the middle of our normal 15; how do people do this???

Ouch! My first several years in a semester system everything felt so incredibly long. I sympathize.

I also agree with Dr. C that doing conferencing is really good, too. I tend to plan out my semesters so that we change something up about week 11.

I'm hanging on by my teeth until the week before Thanksgiving which is when I scheduled movies for all three classes. I have totally lost my teaching mojo and my students are more interested in stories about my sister-in-law than what we are actually reading. Not to mention that I feel completely out of sorts. What I'm trying to say is that you are totally not alone. It seriously is that time of semester.

I heard from a former student that in her writing about lit class they are just writing five paragraph essays with a three part thesis statement--and I spent a whole year with her telling her not to do that. On the flip side, she said thanks to me the current class is a breeze, so you know, there's your brightside. :) Good luck! Hang in there!

The students may be reporting on what they are actually doing rather than on what they have been assigned. (See your paragraph 3.)

Certainly college students should be able to get past the 5-paragraph essay; but I'll tell you, there are times I'd be thrilled to bits with a competent 5-paragraph essay rather than a total mess. I can see why a comp teacher might fall back on the 5-graph structure, and leave complicating the basics to people like me.

I've got nothing for you on the lit/comp end of things, as usual. I will, however, point out that when I was a kid, I rented Spaceballs and laughed like such a goddamn idiot at that "We ain't found shit!" line that I felt compelled to rewind and replay it over and over....and laughed like a goddamn idiot every time. My stomach hurt after a while, but I just...couldn't...stop.

It's pretty hard to make me laugh nowadays, but part of my conditioning was to get through a developmental period when Mel Brooks' lowest gags turned me into an evolutionary reject.

Ahem. Back to professional matters.

#1 THANK you for loving on the quarter system for a bit here. It gets a bum rap, and sometimes it's nice to remember why it can, in fact, be easier than the semester system. (Still, those semesters get longer breaks, right?)

#2 I LOVE SPACEBALLS. I love that scene above all.