because I couldn't add to the end of the last post

Blogger is annoying in that you can't insert a pic where you want it in the post; you have to insert it up at the top and then manually move it down, which I am too lazy to do. I wrote all of the last post (go ponder that first people!) and then started googling around for short haircuts. There are a bunch I was drawn to that I am ashamed to post --- I like the cut, but it's on Hayden Pannitere, or worse, the Kardashian mom! And also the web sites tell me the "Marilyn inspired" look is back, which is tempting me to grow out the cut more instead of go shorter. 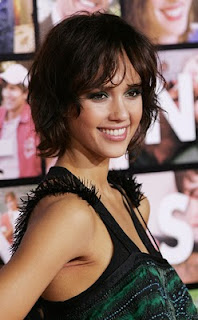 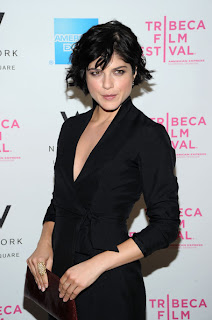 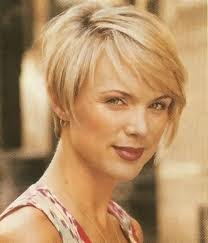 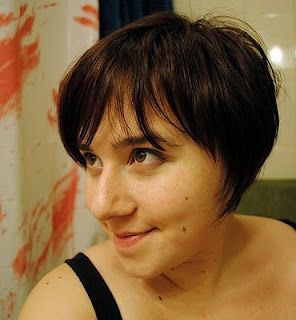 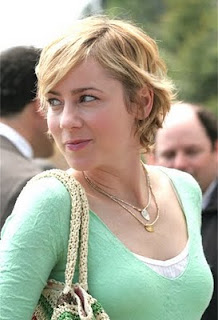 I also worry about whether I like a given cut because of liking the actress or the hair color instead. Hmm. And there's the whole very-round-face-with-a-squarish-jaw thing. Seriously, my mom does look like Jessica Fletcher as well as wears the haircut. Have you seen the few pics of whats-her-face (Oh, Angela Lansbery, that's it) with long hair when she was young? That jaw with big cheeks looks odd with a lot of cuts.

Anyway, more pondering. Something to do to while away the New Year's Eve!

PS my sis in law rejects the short cuts as I have too much curl, and thinks the Jessica Alba bob might not work, as my hair is so thick, but that it is closest to workable.
Posted by Sisyphus at 6:21 PM

Sis, all the cuts you've posted look wonderful, but I admittedly like the top one of this last post (dark, more wavy than curly) and I do NOT know who the actress is;-)

Happy New Year: enjoy the hair everlasting hair research--I wimped out and went with a shoulder length boring layered look that requires me to do nothing.

I like the Jessica Alba hair a lot, and I think that it would look good on you. As for how it would work with your hair's weight/texture, that I can't say, but the *style* would look great on you :)

have you told them you're never going to blow dry it? Or flat-iron? I would say don't get a cut that means you have to impersonate someone with hair you don't have.

^^Which of those is you?

(I have no hair cut suggestions. I go in and ask the haircut person to make it really short and do whatever they think for someone who doesn't have a blow dryer.)

The thing is, all the women pictured here seem to have naturally straight hair - at least, the 3d and 4th pics certainly do, and I think all the other actresses have pretty straight hair in most of the pics I've ever seen of them (admittedly someone like Jessica Alba might be getting hers blown out for the red carpet, but #2 and #5 usually have pretty straight hair, so I think in these pics they've added curl rather than letting their hair go natural). So I really doubt you'd get #3 or #4 without a lot of blowdrying and straightening, and #5's hair looks fairly fine, not thick and wavy like you describe yours being.

(Plus, they ALL have bangs!)

I think Jessica Alba and Selma Blair have pretty thick hair, so they're promising, although Selma Blair has a very distinctively heart-shaped face, so that needs to be considered when thinking about how the cut will look on you. And honestly? I think Jessica Alba is very pretty, but I think the cut in that picture is quite boring. (That said, I don't like center parts, and that length is just about the absolute worst length on me ever, so I can't look at such a cut without shuddering. I need my hair either to be above the chin/ear length, or noticeably below the chin. So I just hate the length hers is at. But that's obviously about me, not you! It's just I don't think I can evaluate it fairly, but I do kind of wonder if it would look at all interesting on someone who's not Jessica Alba.)

Of course I'm probably not the most helpful person because I WISH my hair would curl like Charlize Theron's in the pic below, so.... yeah, no help, really. But good luck with your quest!!