So today I had an appointment with the vet. Timido, the silly neurotic cat that he is, has started scratching his ears so hard they bled. Argh.

Luckily, he was chillaxing in a sunbeam and had no clue what was about to happen. I scooped him up and dumped him in the carrier before he knew what was going on. 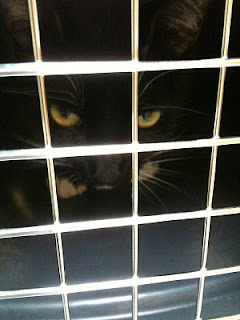 He was not happy, as you can see. But there was nothing much he could do about it.

Well, there was one thing --- he could meow his little heart out. He's kinda the Mike Tyson of cats, in that when he starts meowing in fury, everyone responds either with a look of shock that something so tiny and high-pitched is coming out of that body, or they go "Awwww!" I call him Lil Peeper for a reason. So this time he was mewing, puffed in a little ball in the back of the carrier and batting at the vet people's hands, and everyone in the office was going, "awwww, he sounds so sad!"

I'm not sad, I'm pissed! was, I'm sure, Timido's response. Unfortunately, they didn't find any ear infection or mites or nothin'. The vet gave me some ointment and said if it got worse or continued this way, we could start trying more involved things. But it could just be a crazy cat! Yes, yes. I know he's crazy ---- and he's done this "nervous licking" thing since I got him, so I could believe it's just how he manages stress. Stupid cat. At least I know he doesn't have some new problem. 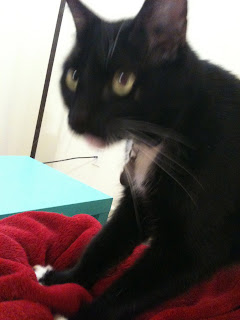 Here's an older photo of him kneading on the blanket in my lap and doing that weird insane-kitty-expression that's super intent. Vet visit over with, he is now back to being calm and happy. Well, as calm and happy as a neurotic cat can be.


Here you can see my cats hanging out next to me, caught in flagrante. 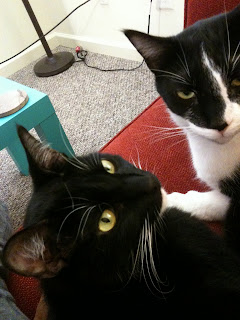 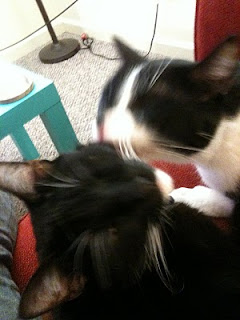 See? It's a regular kitty-grooming-lovefest over here! And then as soon as I get used to that they jump off my lap and start chasing each other, knocking over whatever I happen to be drinking.


And tonight, someone just rang my doorbell. It was this young guy holding an itty bitty black cat, just lolling about in his hands, purring up a storm. "Is this your cat?" He asked. Nope, not mine. Would I know whose it is? He found it out back behind the apartment complex, and he had heard I was the cat lady. (whoah. I'm not sure I like that.) Hmm. Clearly it's not a feral cat, since it's so friendly. "Ooh, and it has a collar!" I said. But no tag on the collar ---- it even seemed like one of those temp collars you might have a vet or shelter put on the cat when you sent it home. Maybe this kitten had just been adopted. I didn't have any suggestions for him. I hope he finds where the kitty is from. 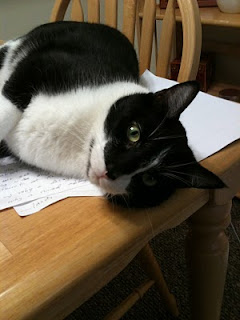 But enough about other cats! Says Loquito. You should be talking more about meeeee. Just like how I like to lie on your papers to catch your attention while you work! 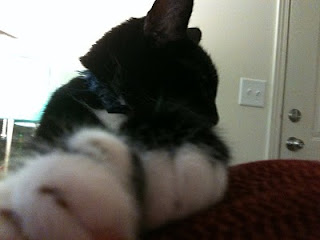 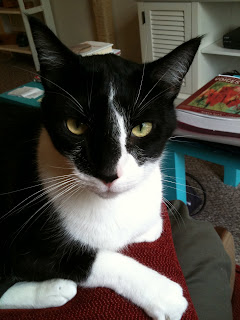 No, mi hermano, I think everyone will find me more fabulous -- just look at this attitude! This expression! The ears! Clearly I am the most amazing kitty of the world! No interloper strays or upstart neighbor-visiting-cats can top this!
Posted by Sisyphus at 6:54 PM

Wow, it's the Harry Potter of cats with that white streak across his face!

Aw, kitty photos!! They're both very handsome. Hope the ear-scratching settles down...