but not when someone's riding a rocking horse, whipping it, and writhing to the music of "Shame on You": 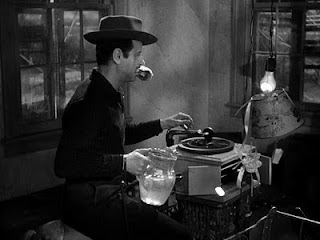 I just watched this crazy, awesome movie, Baby Doll, a collaboration between Elia Kazan and Tennessee Williams. It may replace Baby Face as my favorite old movie.

Have you seen it? It's set in a decrepit old rural Mississippi, like a crazy old Faulkner novel got made as a 50s melodrama ---- like Jason Compson got old and married his niece Quentin and they sat around and talked like they were characters in A Streetcar Named Desire: 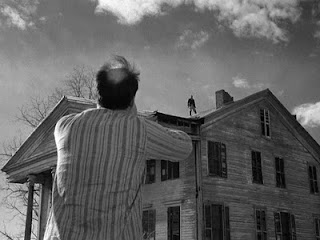 And it's all about S.E.X., without ever having a love scene or even explicit dialogue ---- all the dialogue is just steaming with repression and innuendo. Just the way I like it. I guess it ran into a fair amount of scandal when it was released:

Baby Doll (1956) has been called notorious, salacious, revolting, dirty, steamy, lewd, suggestive, morally repellent and provocative. Time Magazine was noted as stating: "Just possibly the dirtiest American-made motion picture that has ever been legally exhibited..." New York's Cardinal Spellman declared the film "evil in concept... certain to exert an immoral and corrupting influence on those who see it." The stark, controversial, black and white Southern drama was so viciously denounced by the Legion of Decency upon its release with a "C" (or condemned) rating that many theaters were forced to cancel their showings, but it still did moderately well at the box office despite the uproar. Baby Doll's impact was heightened by its themes: moral decay, lust, sexual repression, seduction, infantile eroticism and the corruption of the human soul.

How can you not love that???

It's got this older, ineffectual husband and his "child" bride (since when is 19 childlike? but she has this amazingly youthful, childlike face and tiny teeth, and sounds like Judy Garland with a southern accent), who has made an agreement whereby she will marry him but not consummate the marriage until her 20th birthday. And, of course, if you are a business rival who's been done wrong and want revenge, then, obviously, you'll want to seduce said child bride before the husband does --- although the film itself cheats this notion because of the morality codes they had going on. But if you have been trained to read between the lines and the offscreen shots, you'd recognize that what the film says and what it means are quite different. 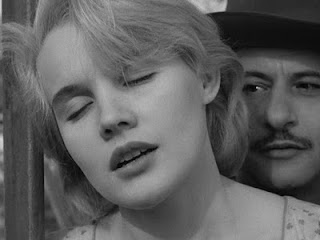 It's got these amazing scenes of seduction, with this girl who doesn't want sex or know what it is, but kinda does, and who had thought she had this enormous power over men with her beauty, but had never run up against a powerful man who had actually done this whole seduction thing before, and she's playing at being a grown-up and then regressing into this unselfconscious, childlike behavior all at once. It was an amazing performance and a very nuanced part, and why have I never heard of this actress before? She looks amazing. 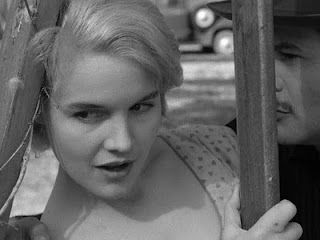 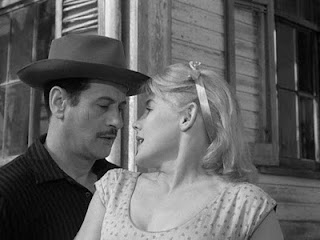 The way he carries on with her, looking at her with a mixture of lust, pity at her childishness, and hatred, you are left in this amazing state of suspense, wondering if the film is going to explode into sex or violence. I won't spoil the ending, although I agree with that review I linked to (and this one too) that it should have had a bigger and crazier conclusion.

Compared to all this lust and rivalry and threatening racial stereotypes I'm having trouble getting into the surprisingly unsexy Jean Harlow movie that is following it and I was originally tuning in to watch.

Yeah, I should totally be working instead of watching old movies, but whatever ---- I'll do all my work tomorrow!
Posted by Sisyphus at 5:26 PM

Thanks for the rec!

So odd to see Eli Wallach looking kind of young! I'll have to check this film out.

Flav --- it's very gritty and missing the sorts of crazy costumes I'm assuming you'd want in a movie. But still worth checking out.

I dunno. How hot can it be with that revolting mustache?

It's one of those movies where every time I watch it, I'm constantly laughing with shocked delight at nearly every word that comes out of the characters' mouths.