May Day, A Love Story 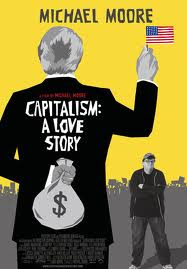 Happy International Worker's Day! I am celebrating May Day --- so named because of the attempts at strikes in pursuit of the 8-hour workday in America that ended up as the Haymarket riots in 1886 --- by watching Michael Moore's Capitalism, a Love Story. In his usual-over-the- top, schlocky and silly style, uncovers the recent financial crisis, from the privatization of prisons to the busting of the airline pilots unions ---- starting salaries for pilots are now as low as 17k a year, did you know that? ---- to the credit-default swaps and foreclosure crisis, and shows how my difficulties landing a steady, well-paying professor job are really just one symptom in an all-around attack on the middle class. It was schlocky and mawkish and a bit simplistic and had too much footage of him doing his usual stunts that don't actually do anything, but still I think it's worth a viewing. Particularly if you haven't been following the news all that closely the last few years. And you know who hasn't done that, pretty much across the board? Our students, particularly the freshmen. But I would get in huge trouble if I screened this in all my classes, and besides, it's too long to fit a class period. But if you don't talk to your students about the destructive effects of capitalism, who will?

I leave you with the music from the closing credits, because everybody needs to hear a swing version of the Internationale:

You're right, what I needed was a swing version of the Internationale. Maybe we also need a hip hop version?

I'm lucky, in that I have the opportunity to talk about all the 'isms. And they are always astonished to find out that you can have socialism and still be more democratic than capitalism. The trick, I've found, is not to label anything until the final minute or two. Then, as you've got 'em agreeing with a strong critique of what they see as a destructive and exploitative system, you tell 'em what the name of that system is. Watch 'em stop cold and think hard.