In California, we hike with lattes in our hands

Damn, why did I not bring a latte with me on the hike? That would have been soooo satisfying! That and a lab on a leash and I'd have fit right in with the crowd!

So I have finally been hiking! This was tougher than I had expected because I don't like to hike alone (mountain lions, you know. And/or Congressmen.) and everyone back here seems to have a regular job. Even my nieces and nephews are doing the summer-job thing, with varying success. Sigh. I will complain about that later.

But I finally managed to get one of my nieces to go hiking! Yay! It was especially odd because she hates the outdoors and hiking in general, and I had to entice her with the promise of a fairly flat and partially paved, easy-to-navigate trail. It turns out that she has a lot of applying-to-school and job prep to do, which has been keeping her trapped in her little studio apartment, and no money, so she was much more amenable to the thought of getting out of the house and seeing something different for free. And I spent the entire day with her chatting, not even getting caught up on big newsy stuff, just getting to know her better, which was also awesome. I think I need to nag the others into going hiking with me one-on-one as well, so I can hear about their lives without parents on the listen nearby. Plus, my nephew is preparing to be an Eagle Scout and has just come back from camping with the troop, so if there is anyone who should be interested in a hike, it's him.

Anyways, I should describe the hike. I should first point out that I hate palm trees. They're so overdone, you know? I am over them. And they don't make nice shade or a lovely bower-like experience. So I have been looking at hikes on the internet and searching for a hike with lots of trees, even redwoods. What, redwoods? Hey man, we have two redwoods planted in our back yard. The neighbors planted banana trees. There are non-native eucalyptus growing all around here. Plus all the damn palm varieties. So you can go see whatever kind of tree you want if you pick the right trail.

Of course, it was dark and misty and cloudy when we got there, and it rained actual rain, not mist, on us several times as we hiked about. I should have realized that anywhere there were redwoods it was gonna be wetter. Duh. But actual rain in California, even in the misty parts, is rare. I apologized to my niece several times. Also when the trail got steeper than we expected. And also when the trail posts no longer appeared so I took a couple wrong turns and then was on a totally random trail that didn't lead back to the ranger station. Ooops. Reading the map several times and correcting our course finally put us back on a trail that had a post, but it wasn't the trail that it should have been, based on our map readings. Luckily I had my iphone which has a compass app, and we set off in the right direction on something that sorta looked like a trail but wasn't marked as one. And we abruptly ran into another trail across our path, with a fence. These two little old ladies were walking past as we emerged from the underbrush and climbed the fence (just a little waist high railing, really) and they shot us the dirtiest looks.

I had been making jokes about one of the postdocs, who went on a hike with me a while back and had left all the maps she printed on the kitchen table. We took a couple wrong turns and had a trail marked with a "danger, don't go that way" sign, and got totally lost. When we finally made it out to the trailhead, we checked the wall map and decided we had hiked every. single. trail. in the park! That was so tiring! Anyway, I made this joke to my niece and we were talking about this and that and everything, and around the time it became clear that we were on a totally different trail than we should have been, I said "ooh, I shouldn't have joked about hiking every damn trail on the _____ park" and my niece got verrrrry quiet. But we did eventually find our way out of the park and to her car, and I thanked her and apologized about twenty million times, so I hope she wasn't too freaked out and had a good time.

Here's a picture of awesome trees, complete with mist: 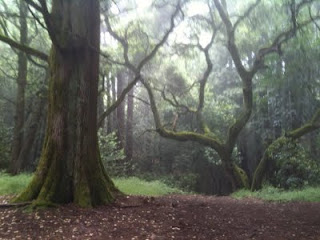 It was gorgeous. We agreed that we were disappointed we didn't see any actual Ents. The place looked like Ents should live there. And I love the smell ---- the rich mulchy smell of ferns and needles all wet and mushy underfoot, the spicy smell the bark gives off (my niece and I argued about whether that was the Pines or the Redwoods that made that smell.), the clear, wet air that even when it is full of moisture feels nothing like the humidity of Postdoc Town ---- I love it.

I even love that we have stupid birds here who don't actually do birdsong, just "grak, grak, grak," and someone else following up with "wheeet! whip!" And, like I said, the place was decently full of joggers and dog walkers and hikers and possibly some homeless people camping in their car and using the public bathrooms ---- not too crowded, but definitely not an isolated back-to-nature place either. And I kinda like that. I'd rather be hiking and overhear some people planning the next hostile takeover of a social networking site than be out away from all civilization and get eaten by a mountain lion next thing. Not that this doesn't happen in our urban California parks, too. I'm just sure the mountain lion would have to ask his running partner to hold his mochachino and his bluetooth while he stepped out for just a second to make this little kill.
Posted by Sisyphus at 10:48 AM

Dude, just because the Ents didn't talk to you, doesn't mean they aren't there. :P

Do the Ents hike with lattes too?