Putting in the bones

So this time when I started to write my article, Floyd, I started with some theory and then went straight to the primary text. And I wrote a little and then outlined it, outlined it and then wrote a little more, and moved stuff all around, until I thought I had figured out a structure for the whole article.

Only then did I really go start looking at any secondary criticism. It feels weird, like I'm doing something backwards: 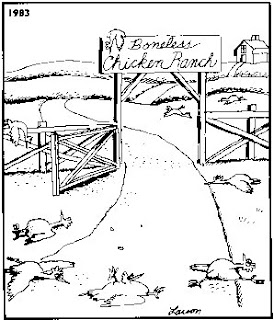 It feels like I am trying to put bones into my boneless chickens so that I can later de-bone them. Hmm. For one thing, I found a lot of critics who say basically the same thing I say at various points of my article --- not argument-skewering stuff but basic statements like "Mr. Cuckold had lifelong troubles with the meaning of masculinity, possibly because of his relationship with his wife, Debbie*" --- and then I am stuck with who to cite or not on this basic claim. It's tempting to just copy/paste everything I have possibly read that could work there, and then I have an essay that is six times as long as it was and I need to boil down all those quote paragraphs to something manageable that will fit in the flow of my argument. And then I go partly anxious and partly lazy and think to myself, "that will be a brilliant part of the essay once I've just fixed that little spot!" and then I don't work on it.

It doesn't help that I vacillate between wanting to quote all the juicy snarky phrases or poetic bits that critics have written, and just using social science citation style and reduce everybody to a name and publication year (Whangdoodle, 1969, Pibbett, 1975, Snotpucker, 1983 and 1984, Sterne and Fielding, 1995).

Maybe I will get better at turning books into summaries/paraphrases as I read and someday be able to avoid my compulsion to Include Everything! as I get more fluent at writing articles. I sure hope so, as it is slow going.

In an only-slightly-related note, I have been working for years on training myself to start working first thing in the morning, and to work every day. (mostly. I have gotten better, even if I don't work every day.) But I am still terrible at keeping focus and keeping working for any length of time, say after the first hour. And if I can push myself for two full hours I really can't concentrate and everything falls apart after that point. Anybody have any advice, not for getting started or confronting the blank page, but for continuing?

I have advice that probably isn't what you want to hear: if your brain just says no after about an hour or two, then it's time to stop. Maybe you can pick up after a few hours of doing something else, or maybe you only work for 1-2 hours a day. Because here's the thing: when you push yourself beyond the point where you're actually working effectively, you're wasting your time. I've become MUCH more productive since I stopped beating myself up for only writing for a couple of hours at a stretch. The only way I can go longer is if I have a terrible deadline hanging over me, but then after I get the thing in, I'm useless for like a month, so it all evens out.

I love your sources; Sysquirt is such a common name, you'd better add some more identifying info ;-D

I don't like to have to agree with reassigned time's comment about how long you can work before your brain starts wandering and you lose your concentration but I totally agree. Completely. The point is that you use the time that you do use effectively and efficiently. Once your mind starts to wander since you'll just waste your time.

I love your sources by the way ;-)