Hello. I'm indulging. I watched Glee tonight, despite not being too into it, simply because it's a show on tv in the evenings that isn't Law and Freakin Order. Glee's growing on me. I don't like what I call "identity work" shows, where flat and unbelievable characters serve as viewers' fantasy identifications: is this who I am? is this who I am? is this who I am? Pffft. Soap operas and teen shows, usually. And any shows that have a glamorous career that is never covered in favor of the banal doubts of the main character. And Glee totally has that, along with silly conflict and completely unrealistic levels of perfection. But it also has some pretty snappy dialogue when it puts its mind to it.

Likewise, I have been watching Suits, since it is one of the few shows I actually caught the pilot for, and I tend to hate jumping in to a series in the middle of a season. Unfortunately, it is rapidly going downhill. I knew the show was going to be formulaic, like all other shows that have to wrap up and achieve closure in just one hour, but it had some snappy dialogue and I liked the combative legal stuff (also snappy) ---- it felt like I was learning a smidgen of what practicing law is really like, that sense of it being like a combination of a game of chicken and a chess game where you have to think six steps down the line on your opponent. But, really it only has that at small moments, and most of the rest of the time I can predict what is about to happen because of 1) how much time is left in the show and 2) the rule of the Columbo Rule (you have to introduce a suspect or solution to the viewer rather than bring in someone completely random and new). And the side plot of trouble-with-gangsters is moving into pure silliness. Plus, it bugged me since the beginning that the two main dude characters weren't visually distinguished enough. Mirrors, foils, ok, I get it.

I will probably continue to watch, though, since it's on and I actually remember when it comes on in the tv schedule. I guess I'll keep it in rotation with Psych, which is basically the same type of show, except with more silly punchlines.

And to occupy the rest of my brain, since I am not invested enough in either show to not multitask, I am clicking around the internet, thinking about shoes. Know what? I did a shoe post, probably last fall? where I said there were a whole bunch of really cute, colorful, patent leather shoes out, and I totally should have just bought them all, because my entire Zappos favorites list is now discontinued. I can see all these pics of gorgeous reds and teals and blues and purples and aquas but they are nowhere for order. Sigh. And I am just not excited by the new releases on Zappos right now.

This, however, was not on zappos, and it is somewhat of a possibility: 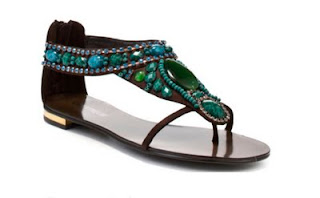 As is this, which unfortunately is not as cute as the bronze ballet flats I had saved and should have bought with the chance (sob): 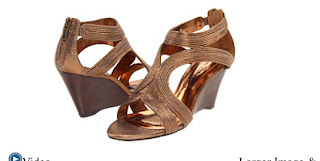 And this shoe is so cute, I love this color, but I opened up all my dress pictures to see what colors I need to go with them and I can't see it working with them. Alas. 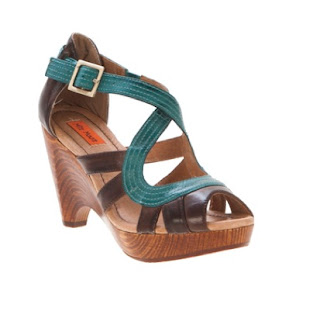 Part of my dressing dilemma, as I believe I have said before, is that I buy whatever pieces look prettiest and then I have trouble making some things into a full outfit. Bright orange ballet flats go fine with jeans, but not any of my dresses, and I need to make sure I have stuff that works with the dresses. I have plenty of boots and plenty of funky colored shoes, and I may need to get me some basic brown and black dressy shoes so that I always can wear my dresses when I teach. (I'm thinking ahead to fall, here.) But none of the basic neutral shoes available have cute detailing on them like last year!!!! Argh. I know I was working on paying down my debt and saving my money, but there really is truth to the maxim that if you really love something in the store you have to get it right then. Or be prepared to face the consequences.
Posted by Sisyphus at 10:30 PM

Love those teal-y ones. They would go with my dress for my brother's wedding...

The last ones? They are Miz Mooz and you can get them through their website or endless.com --- have fun!

Sis, I like them, but I would fall flat on my face if I tried to wear them!

The beaded ones = To Die For.

Could never wear them...something about my arches requires that I skip flats, but oh how I love them!