Even Goldilocks would be daunted by these odds

Ok, so my rice cooker-less rice cooking attempts. As a side note, I must not have many Californian readers, judging from the lack of rice cooker use out there. Did you not learn to cook from your Asian American friends and roommates? I can't imagine people not having ricemakers --- hell, I can't imagine any of my friends' families giving up one of their three or four different machines to help me out ("No, you can't have that one; that's for when everyone wants rice. No, you can't have that one; that's the small one for when only a few people want rice. Or a snack. And that one we boil the duck eggs in, so obviously you can't have that, because if you're boiling the duck eggs, you can't use the rice cooker for rice, and we don't have any burners left open on the top of the stove!) 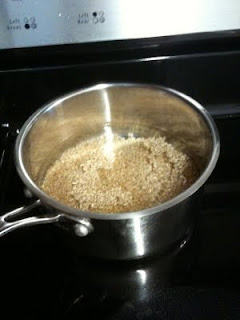 Then I set a timer, chopped up some veggies, and went off to do other things: 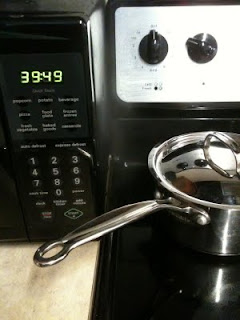 So far, pretty much like the rice cooker, except that you don't have to be careful about the exact amount of water you put in since it adjusts for you.

After 40 minutes, the rice was "open" but still pretty soupy. And I had taken off the lid, which I guess is a no-no. 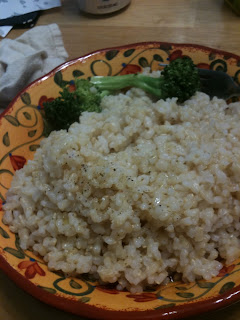 You can't see that it is still pretty watery, but it is. And it was completely tasteless. And the texture of risotto, which I would have minded less if it were flavored like risotto and had lots of cheese in it. I like my rice --- not "crunchy," not "chewy," but when you chew it there's something there; it's not like porridge or oatmeal or any of that gross gloppy stuff. Al dente, perhaps? And I had already eaten almost all of the veggies because I was hungry and tired of waiting.

Luckily I had tons of parsley that I wanted to use up, so for the next meal I chopped it all up really fine and added lemon and olive oil and lots of salt and pepper. Then it wasn't bad.

But see, the nice thing about rice cookers --- beside the fact that they will keep the rice warm for you when it is done and you don't have to worry about turning it of or eating it right away --- is that it takes the guesswork and training out of the cooking process for you. My poor rice cooker! I miss you, darling: 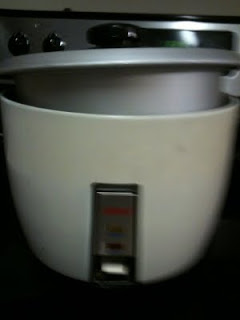 Tonight, I have been experimenting with trying to make red beans and rice. I usually cook vegetarian at home so I thought I might as well try to fine a vegetarian version of the Louisiana stuff. Taste-wise, it was ok, but after three hours it still looked like a bunch of beans. I don't know why mine didn't fall apart into a wonderful sauce like in her picture.

And after the last rice-cooking adventure, I put in exactly two cups of water instead of the 2 and 2 quarters cup or whatever the ratio is, and look! 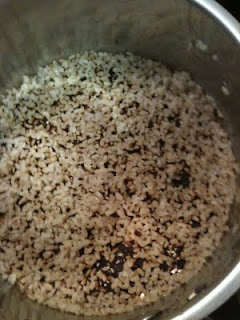 Grrr. I probably only got a half cup's worth, and look at the rest there. You rice-advice people!
Posted by Sisyphus at 5:09 PM

I am personally a big fan of the rice cooker, but I must say that pre rice cooker, my brown rice always turned out fine if I followed the instructions on the package itself. They differed slightly from package to package. If it looked/smelled like burning, I'd turn down the flame. If it's too watery, leave the top off for the last few minutes. I'd check out thrift stores for a cheap rice cooker too.

I have no clue. I have never used a rice cooker (and I am a CA native), and the two parts water to one of rice has always worked fine for me. Do not take the lid off. Bring to a boil & then turn the heat very low. That's all I got.

It will be different for each type of rice, so checking the packet is a good idea. Also, some rice likes to be rinsed (or even soaked) before it is cooked and the pack will indicate that as well. Some rice likes to be coated in a little butter before the water is added (but I guess that might just be Basmati)
I feel like a bit of a fraud trying to offer advice for brown rice, because I always use Basmati or Jasmine, and I'm pretty sure that's a lot easier to deal with. Mind you, I do still stuff up, so here's what I do on those occasions, just because it might help.

1) The rice is cooked but there's water left.
If it's only a little water you can take the top off and boil it off, or if the rice can take a little more in without going mushy you can turn the heat off and let it stand on the warm hob for 5 mins or so with the lid on to take up the excess.

2) There's loads of water left and the rice is done.
This is a draining situation, in my experience, I use a colander and if it's too sticky I rinse with boiling water from the kettle. I also know people who always do this.

3) The rice is still tough and there's no water - add a little water, preferably boiling and put the lid back on for some more steaming time.

From this list you can see that I do take the lid off to check my rice, but only right towards the end of the cooking time. This might not help, and I suppose it's no good for the dishes where other ingredients get cooked with the rice, sorry.

I had no clue about rice cookers until I met Chica. I grew up in the South, and we always cooked rice on the stove top. By "we," I mean "people in my general vicinity," as I was not a huge fan of the stuff growing up. I did start cooking it more in college and grad school, but there always seemed to be a high risk of burning it or undercooking it in some way.

But, as I said, I met Chica, who is Asian and who promptly bought me my very own rice cooker when she learned that I didn't have one. I think it's one of the first things she ever bought me.

As for type, we just go for the kind they have at the nearest Asian grocery store. Nothing fancy, really, but it cooks the rice and keeps it warm and I never worry about how it's going to turn out.

Alrighty, so...I have multiple rice cookers in use just as you describe and I do also make rice on the stove but i have to confess, I screw it up every time if I'm using electric rather than gas. You have to get the amount of water right (easy if you follow the package), then I bring it to a boil, after it boils I turn down the heat almost as low as I can get the flame without turning it off. I have no idea how to do this on an electric stove.

So sorry. I love the rice cooker.

I meant to say I have multiple rice cookers AND i buy rice in 25 pound bags. We're big rice eaters here.

I have no idea about rice cookers. I've never used one to be honest and I don't know many people who use one. Type? I know how to cook all of them in a saucepan and there's different ratios of water to rice depending on the type of rice. Oh, if you want to reduce the amount of starch (ie make it less sticky) I would suggest washing it in a sieve before putting it into the saucepand with the water to cook.

My advice is pretty much Elsan's. If you have water left over, drain your rice in a coliander. In fact, that was the way my family always made rice as a kid. Lots of water, test for bite, drain when ready, give a rinse with hot water if sticky. And, if you need more water during cooking, add it.

More controversially, until I learned about the wonder that is sticky rice, I never used a lid to cook my rice. Just let it boil, reduce heat so its simmering, and leave it to cook.

As someone with an electric hob, rice (and porridge for that matter) will burn, even with plenty of water, if you don't stir it occassionally, especially when you start to cook.

You can also cook rice in a microwave, but I can't remember the instructions.

To be completely honest, I've only had luck using a small le crueset to cook rice.

2:1 ratio water to rice. Bring to a boil. Turn down temperature, stir, put lid on. Check 45 min later (for brown rice... I think something like 20 min for white rice), if still watery, stir and take lid off, cook until water evaporated. I also like al dente non-sticky rice.

Maybe time to get a new rice-cooker? http://www.consumersearch.com/rice-cookers
$30 could save some heartache.

Here is my foolproof method:
2 to 3 ratio rice to water (I find 1:2 much too watery). Bring to a rolling boil and give it a stir. Put on top and simmer on low for 20 minutes. DO NOT TAKE OFF THE LID.
Good luck!

Rice can be tricky. Being from Louisiana, we used to have rice on a daily basis. Used a rice cooker out of ease. But you can use the pot method. My dad used to put water up to the first knuckle of his ring finger. Don't go overboard with the water. But you can always drain excess.

Also, a great secret to cooking rice is to use one of the four cup microwave rice cookers. They work really well.