Avoiding dealing with my life by watching Parks and Rec 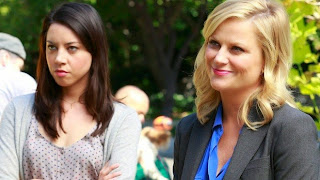 That screenshot is a nice capsule of their personas.eh?

I'm in Season 5. I don't love the show but it grew on me. Mainly I am posting here because I am hoping that I will be inspired by or magically carry out the subplot of the "Leslie vs. April" episode where people who are listening to Tom Haverford's latest sales pitch constantly keep offering jobs to Ben. I can hope, but I fear that a world where people recognize and remember competence and good work skills and then offer up jobs is a fantasy. Besides, nobody will have seen me be competent at my teaching job if I go back to my parents' house. On the other hand, nobody will have seen me do the equivalent of implode on camera with the sweats and shakes and deer-in-the-headlights look.

Back to the picture, I think my teaching persona is probably less like Leslie Knope and more like April attempting an imitation of Knope. Except now that I've said that, I remember her imitations of her sister back in season 1 that were not really imitations at all. But if you wanted someone with a teaching style that was bubbly or maternal instead of dry and filled with mood swings and snail references, I would probably not be a good choice.


(I can't find any good shots of Ben's character from this episode because this actor is very good at a smarmy and awkward type of humor that actually pains me to watch, and all of the screenshots people have taken of this episode are awkward or awkward with finger-guns, and I can't deal. Here's a picture of him looking serious, because I think as I get older I keep getting more Serious. On a side note, this guy's physicality reminds me of not one, but two ex-boyfriends.) 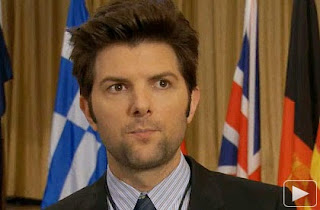 Anyway, sometimes I have felt like the force of Order and regimented stuffiness trying to impose rules and consequences onto a classroom of anarchy --- both fun and lethal. (To someone who's had a lot of contact with Anarchy as a political philosophy, I had not realized how incredibly organized that movement actually is at root. Regularly drinking until you black out, being completely incapable of handling basic life events, getting in and out of jail, pregnant, and finally being unable to complete the semester --- that is also anarchy, and I don't really deal well with that kind of life philosophy. I'd much rather try to get a group of black bloc members to come to consensus around --- uh, any topic at all.)

Basically, I am trying to understand myself better so that I can figure out what sort of job I should take --- much like Ben's decision to look for a job he can get excited about and that will use all his talents vs. one that is secure and pays well and is boring. I have decided that I have absolutely no sense of humor at all and want to see no evidence of it anywhere in the job, and ideally it would be a job that does not involve contact with people of any kind. But the work can't be boring, or meaningless. And I don't want to do the equivalent of selling Sweetums candy to diabetics, or greenwashing Sweetums through running their nonprofit foundation.

So. That should be easy, huh?

I watched a lot of parks and rec when I was off sick earlier this semester - so at last a popular culture post I actually knew about! Nothing very helpful to say except one friends back up plan is to work at a cattery because "at least the shit will be real" and "the most warped personality is more tolerable when it's furry, short and doesn't speak English"

I wish there was a system for actual paid " recovery breaks" after really crap years, so people could make decisions after a bit of a rest not whilst still reeling in ghe rubble...

I haven't watched Parks and Rec and can't figure out from your descriptions whether I should or shouldn't.

But this comment is really just that I want to send you a big hug. They are idiots, as you know. And it's so hard to figure out what you really want to do when things are going like this. It sucks feeling so up in the air, and I am sending lots of good vibes your way for a soft soft landing.