Everything I hate about the shallowness and empty posturing in contemporary life has naturally fucked up the job searching process as well. I understand that my desire for reserve, privacy, an authentic connection to nature comes across, these days, as less "friendly Walden-dwelling hermit" and more like this guy: 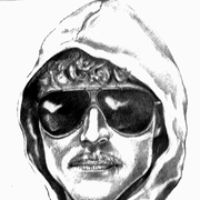 But honestly I don't care. The only thing I want to do less than toot my own horn about some meaningless miserable fake accomplishments is to participate in a circle-jerk of meaningless accomplishment-stroking for others. But is that the way to get a job in the twenty-first century? Naw, we got a shitty website for that.

Let me say that the whole experience of That Site is horrifying and everything on it reeks of either desperation or douchebaggery. I know resumes and cover letters have this incredibly stilted and formalistic language to them, but it's like putting on a suit and tie for an interview and everybody knows this is that formal thing you do. Making a website where you strive for language that comes across in that same incredibly stilted and awkward voice but also really really pretends that you believe in that tone and speak that way naturally just seems wrong. Too public, too permanent --- like you're tattooing that suit on out of love for it instead of wearing it only to the interview. Ick.

And I just don't get how you yourself writing words like "loves" "excels at" or "brilliantly exceeds" could possibly make them any more true than someone else writing it for you. They are only words. They are skillsets, not hobbies or fandom. Except for using Microsoft Office. I mean I love demonstrating my expertise at that shit. It's the first thing I think of when I wake up in the morning and the the last thing I think of at night. If you offered me a choice between having sex and implementing Exel, I'd have to go with the Excel. Because I am a proactive self-starter with a strong interest in synergizing deliverables in a fast-moving office environment. I am an Office Ninja and I authentically love your shitty and meaningless product.

Beyond the tone everyone seems to adopt on That Site is the problem with "connections" and "networking." I'm sure that if you, dear reader, are an educator, you have had the experience where some former student signed up for That Site and the first thing that happens is the motherfucking site spams Every.Single.Fucking.Contact --- which means every single person this student has ever emailed with including anyone they have shared an English draft with or had questions about when is the final --- and then fucking. get. hounded. for weeks afterwards because the only option is "accept this connection and join us!" not "I have no clue who this dipshit is I teach at least 120 students every semester." So when I finally bite the bullet and spend 30-40 minutes scrounging the site for a way to turn off the "spam the entire world" option, I finally decide to use my non-pseudonymous gmail rather than making up a new one. Not twenty minutes later as I am scrolling through the horrors of that site, I get a ping from a distant relative: Do I see you have signed up for ______? Is there a problem? Would you like to talk?

Twenty minutes more or so of scrambling frantically around That Site, and I push a button. I block my relative. And I leave everything off my "personal brand" page. I understand that's not how to use the site and it probably looks more creepy than a filled-out page, but how can I "tell my story coherently and persuasively" when I don't know what story I want to tell? What career field am I going into? I don't know! What skills should I emphasize? I don't know! What's my objective? I don't know! What are my previous jobs and why am I leaving them? Uh, I really really don't want to talk about that!

I dunno what job I could possibly get without eating shit and doing the Unholy Networking Dance. Maybe Artisan Yak Herder? Hmm that whole "cabin in the woods" thing is sounding better and better. If only I could get my mom to bring me lunch every day.

Luckily, my sister and I are still getting along and still speaking to each other. The weather had even cooled down and made this place bearable (until yesterday). But there are little things that are hard to get adjusted to.

For example, everybody has their own system for storing things and cooking things. If this is your system, this makes sense: 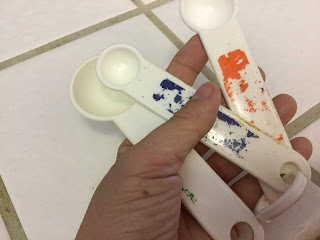 But if you are not the person who bought these measuring spoons, how the hell do you know which size is which now that the labels have rubbed off arrrgh! I am doing a lot of cooking by guesstimating these days.

Other problems just have to do with the limitations of space and cheap kitchens. My sis doesn't want to upgrade her kitchen until she knows what is going on with her daughter, and whether my sis will need to help her with a housing down payment, or possibly my sister will move someplace nicer (and she is definitely worried about all the stairs leading up to her place and getting older.) How can you argue with that kind of logical thinking?

It does mean that she has one cabinet for every single cooking implement and one for her entire dish collection, all stacked atop each other so that whatever you want is at the bottom of a 25-pound pile. 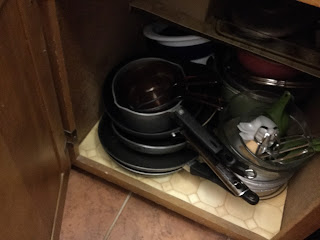 And it also means that there isn't really much room for me to put my stuff away, which is fine since my spices are in cute little shoeboxes: 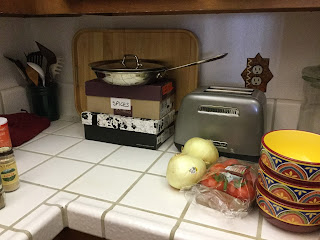 As a reward/procrastination from the obnoxiousness of job hunting, I am throwing out one thing a day from my sister's fridge or cabinets. This one has a "best by" date of 2010: 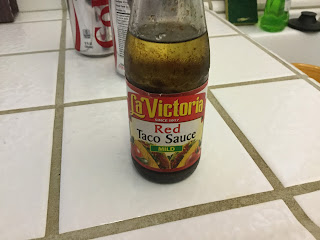 So, yeah, I'm fine. Mostly. Little freaked out about cooking/eating here but that's all right. In a month or so I will have completely replaced my sister's systems with my own, mwahahahahahaha!

First of all, let me say that I'm glad to have helpful and supportive readers! (Or, really, any readers at all.) People have not only posted potential things on this blog for me, but I even got in contact with someone to do a practice informational interview! Or maybe it was even a real informational interview! I don't know; I'm not used to doing these types of things.

Anyway I have sent out a couple more things, slowly and gradually, and I have a lot of stuff prepared for jobs from UCOP (Office of the President) but their stupid website/database thingy isn't letting me upload things right now. Maybe it took off early for the Friday and that's why my files keep getting rejected.

Anyway, it is kind of fun just reading across all the jobs that are posted and imagining what it would be like to do them. Even stuff like "groundskeeper" or "agricultural supervisor" or "naturalist coordinator." The problem is that I can quickly become overwhelmed by the options and spiral down into depression. But before that happens I found "Director of UC Observatories," which is fun to imagine doing in these days of the Pluto fly-by etc. (I'm imagining it requiring wearing goggles and steampunk gear while flying dirigibles between James Lick and the Griffith --- don't bother to correct me; I'm not remotely qualified so I prefer to imagine it this way and that makes me happy.)

The only problem is that after a while I get into the, "ok, yeah, I can do that" mode and feel like I have to apply for everything out there, right now. And then, as I've already mentioned, I feel overwhelmed. I should cheer myself up by buying some steampunk dirigible goggles.
Posted by Sisyphus at 5:02 PM 5 comments:

Well, I must say this sucks. I like orderly, transparent systems and procedures to follow; my sister says that outside of the academic job market, job searching has nothing to do with any of that. If it were a case of typing lots of things or pulling a lever a lot of times, I would put in long hours of work job searching. But it's kind of like job hunting and gathering, when I have no fucking clue what tracks or spoor jobs leave and I'm kind of just wandering around in circles. You know, just like if I were out hunting in the wilderness. I hope I have better luck in this than in, I dunno, duck hunting.

So I'm wandering the hills and woods looking for jobs to apply to. Except, as my sister points out, most of the jobs her company fills never get posted --- they get filled before they are advertised by internal candidates or because someone personally knows a good candidate they should take a chance on. The What Color is Your Parachute book agrees: 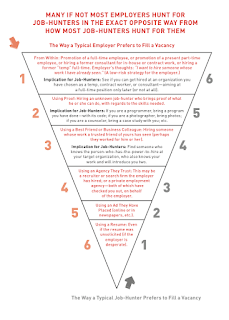 Bleah. You know what this means? I will need to find people who are employed and convince them I am a good candidate they should make a job opening for! And that means ---- networking! AKA talking to people I don't know ugh!!!! Or making ... ugh, small talk! Or even asking people for things! BLEAH!!!!

This post might not make any grammatical sense because I have the tv on in the background and I can never write like that. I obviously can't revise or proof either because I keep putting in words from the Daily Show as I read back through.

Anyway, I found three things and applied to them today, so I feel like I have accomplished something. But soon I'm going to have to talk to people and do all that networking shit, and I am so not looking forward to that.
Posted by Sisyphus at 6:47 PM 5 comments: