My cat is stuck under the couch. 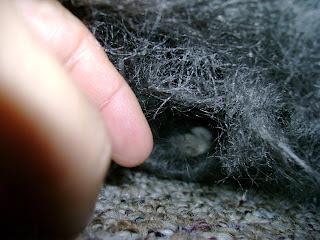 In fact, he keeps getting stuck under the couch, and not being able to get out unless I upend the couch and lift him out. If I don't, I have to listen to scrabbling noises and his piteous mewling. The netting/backing/whatever on the bottom has come loose in one part, evidently, allowing Timido to get in, but not figure out an egress. 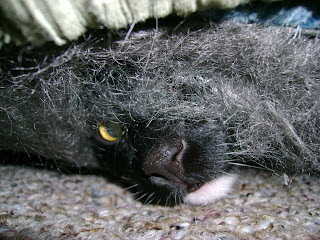 As you can see, he's working on that part. I don't really appreciate the puffs of nasty netting stuff accumulating around the apartment though. And now it looks like he may have a scrape on his leg --- is it from getting stuck under the couch? Is it the reason he keeps going under the couch? People, I do not know. That is why I am taking pictures and asking the Internets. 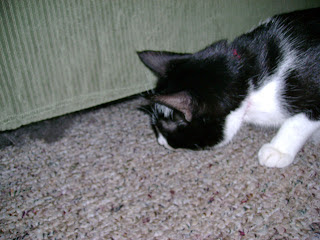 So, Oh Wise and Powerful Internets, how do I keep my cats from driving me nuts? I don't have a staple gun to fix the netting hole --- should I get a staple gun and new netting and try to fix the thing? Try instead to remove the netting stuff completely? (do I really need it?) Try to wall off the underside of the couch somehow? This couch I got used back when I started my first grad program, so I understand it's total shit, but I had planned on waiting to get anything new or fix anything until after I get a new job and move, as it's probably only a year to go. And I just made an appointment for the cat checkup for the 5th --- is this a sign that Timido is trying to find a hole to crawl in and die somewhere? Or that he needs cat therapy? Should I try taking him in earlier? And will I ever be able to own anything nice in my house again?

My life ---- so pitiful and yet so filled with tiny frustrations.
Posted by Sisyphus at 9:50 PM

Okay, if I were you I'd keep the netting stuff on there - otherwise he could crawl under and get into the springs, which seems dangerous to me. I'd flip the couch over onto it's back (much like an upholstered Gregor Samsa...) and duct tape the entire thing closed!

There. That's my wisdom.

Or you can go buy a cheap twin sheet and replace the netting with something more durable.

I would say buy a staple gun, but then, I have a strange fascination with staple guns (no idea why). Our rabbit used to climb into the netting under our box spring, but we ended up just ripping it out because he was driving us crazy and he'd made the entry hole right in the middle and we couldn't fix it.

And if you ever do find a solution for crazy cats, I'd love to know what it is!
--Sarah

Hey, mine does that! Except it's under a dresser, and he has to come out backwards and bedraggled under his own steam much (much) later. Yeah, I vote for getting a staple-gun too.

He never went inside the couch, though. I'd second the acquisition of a staple gun: really fun tool, a staple gun. Endless uses.

Two of our cats -- brothers who follow each other into badness -- started sleeping in the box-spring, and for a while we fought it: sewed the opening shut, which brought on the clawing of a new one, &c. Eventually, we just ripped it off. I'm not sure that's a good idea if there're actual springs down there, though.

So I vote duct tape. (But then again, I always do.)

Thank you everyone for your help. However, I am still confused: are you suggesting I apply the staple gun/duct tape directly to the cats, or merely attach something to them large enough to prevent them from getting inside the couch?

No, you staple the job applications to the cats. That way, they can't get stuck under the couch because they're too busy delivering application packets to the University of Fairbanks, and you save on postage. It's perfectly logical.

It is a universal law:

I am so doing the job applications thing with my own cats. Somewhere, there's a hiring panel that'll work for. "Well, I don't know - her publication record isn't exactly stellar, and really we were looking for an early modernist anyway, and - awww KITTY!"

I am totally sending out my job apps with Mr. Tabby and a stamp on his ear. They might not care about me, but they'll want him -- and he's a mean negotiator. You really cannot argue with him when he curls up on your lap for a nice nap -- you know he means business.