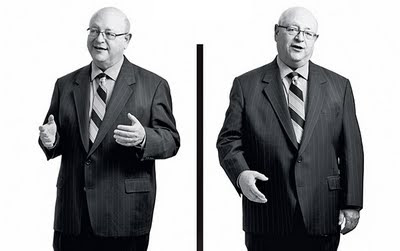 Get a load of this weird Q&A with Yudof if you want to be annoyed. Not only does he come off as an incompetent, pompous asshole who can't even describe what his job is or justify what he does, but the interview itself does almost nothing to lay out the larger stakes for why he needs to be questioned ---- California's budget mess, the fact that the legislature accepted Obama's stimulus package for the UC and then took an equivalent amount out of state appropriations for the system, the fact that undergraduate tuition is skyrocketing while students are unable to get into classes --- as witness the four different students I met today who are enrolled but do not have a single class ---- yes! they are sitting around hoping to crash a class, they are paying full tuition for zero credits!!!!

Some of the more annoying passages:

Do you raise a lot of income from private donations?
We don’t do it in the office of the president. The focus is campus by campus: Santa Cruz or UCLA, or Berkeley or San Diego, Davis. They have their own development offices, and I’m there to — some of the things I do very well. I smile, I shake hands, I tell jokes.

Why can’t you raise money, too?
I’m out there hustling, but I go where the chancellors invite me. Otherwise they get upset.

You don't even do a good job at fundraising??? The campus chancellors have to order you around and tell you where to go to fundraise? Why are you even in this job? Who the hell thought you would make a competent UC President? Dude, as I have said before, I can smile and tell jokes (you might even get more money using me than Yudof if you squeeze me in a dress and tart me up for all those grip-and-grin events), I have a PhD and lots of experience in higher ed, specifically the UC system, and I would be UC President for a pittance compared to Yudoff's massively bloated salary --- and I promise to put the money saved when I "furlough" all those top administrators right back into undergraduate education where it counts.

For more infuriating links about the UC budget, you can see my older posts here or here. And I found another Yudof link --- an oldie but goodie --- that shows us that, hmmm, maybe he's not the best man for the job, if the job is to be accountable to the students and workers of the UC system rather than corporate interests and construction companies.

Walkout roundup to come --- and if you have campus pics, pass them along!
Posted by Sisyphus at 7:48 PM

Labels: -Whose University? -Our University, Yudof

I agree with this post, which I think is too nice to mr Yudof! Actually, I don't understand why these UC regents go around partying with Californians taxpayers money and when there's problem they hit our kids with hikes! Couldn't they go around and sell UC System's ideas and brain power to Businesses to raise money for the UCs? They act as if they own the UC system! Is in it time to reboot the UC Regents style of governing completly and find a 21st century way of managing our UCs rather than use an outdated system of management fielded but an out-competed management like Mr Yudof and his set?

Well, these NYT pieces are usually silly, but still. I'm sure you'd do a better job. And really, the system doesn't raise money to be used across the system? It supports the creation of a tiered system? To them that hath shall be given...

And since he gets a house (not AF1, but still) I don't get the salary differential.

Oh yes, I think for my next project I'm going to find out about what a regent is exactly, and how they get appointed to their jobs, because obviously they seem to have secret powers that the faculty and students are denied.