The reading-and-commenting continues apace. Well, not a very fast pace, but a steady one. I have now read several of my chapter introductions in quick succession, with interesting findings.

The first chapter intro I wrote came to me accidentally in the middle of my prospectus defense, and I actually had to stop in the middle of the post-exam celebrations and try to write down an offhand comment I had made. That intro just sort of appeared and I didn't ever do much to rewrite it and I have never ever had that experience since.

The second chapter intro I wrote took for. ever! and was highly frustrating and I must have rewritten it a bajillion different times before my advisor saw it, and she made me rewrite it from the ground up when I turned it in to her as a final draft.

The third chapter intro I wrote had just as long and painful a process.

Having read them all this week, after not looking at them for far longer than a year (well no, I might have edited them when I filed the diss, I don't remember), I can say with assurance that the earlier "difficult" one completely sucks worse than the later one. Progress! The writing process didn't necessarily get any easier, but the quality of the output got better. That is something at least.

As for actual chapter revision plans, besides needing to bring out a consistent "throughline" across the chapters (it's not surprising it isn't really there yet since when I was writing I didn't really know what discoveries I might make), my biggest problem with the first chapter is signposting.

I often go off on stretches where it's not clear where I am headed or how this is advancing my argument. Some places really are pointless, in that I felt obligated to give some background or discussion that I had researched (I read those history books! I must use everything I read!) or I became obsessively attached to a particular discovery or idea or phrase. But a lot of the places, after I had stared really really hard at them and maybe eaten a cookie, were relevant to my argument and were the perfect passage to advance my claims or link to previous themes of the chapter. My argument is there; it's just submerged. 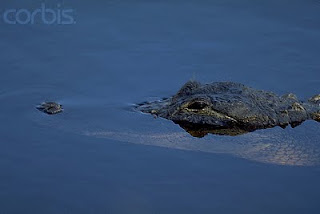 And that's dangerous. How can I guide my readers across the slippery rocks of my mind if they can't distinguish between the water and the path? And the alligators? 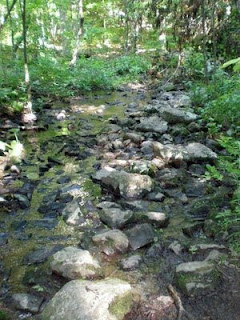 (Yeah, I know, this isn't a very good visual, but I couldn't find an image of submerged creek paths that worked for me.)

Here's where we are going to go, I need to say. To get there, you'll need to cross from this rock to that one here to this other one that's a bit more slimy and you should not step on that rock over there, because that rock will snap off your leg faster than you can say Jack Robinson.

In short, I need to find the argument and all the connections that are already there (for these are not bad chapters) and bring those signposts out.

Now if anyone could suggest how best to account for this work on my InaDrwiMo challenge. I just got exhausted and need to go take a late nap.
Posted by Sisyphus at 9:08 PM

What Bardiac said. As for InaDrwiMo, I think you'll have to give up on the word count approach, and say that by the end of the month you will have a clear outline of the whole book, including what the bridges are, the stepping stones, and the handrails you are providing for us as we cross the creek so we don't fall off the rocks.