I watched a movie tonight! Shocking. (It's just my pattern that I put all sorts of depressing and/or artsy movies on my queue and then don't feel like I have the stamina to face them after working, and then they sit there near the tv as the Big Art Movie Pile Of Guilt.) It was an Iranian film, Iron Island. I liked it. (Just to get that part of the movie review out of the way.)

Iron Island is a fairly light film, portraying the everyday lives of a group of poor Iranians who are basically squatting, living on an abandoned oil tanker. Not much explanation is given for how it got there or how they got there, but the reason they can live there is through the strong will of "Captain" Nemat, who runs the complex economy of the whole ship. Everyone who moves on to the ship does work for the community, whether it is baking bread, or sewing burqas, or sawing off bits of the ship to sell for scrap metal, and everyone pays Captain Nemat for their space on the ship and the resources they use.

It's a tough environment to live in --- everything from food to lamp oil must be brought on board, and despite one tiny scene of an older man watering some spindly shoots growing from a box bed filled with earth, you can't really grow anything or make anything in this economy. This makes it an economy that is both utterly dependent and fragile, but also thriving and with unexpected richness in places. One boy, Ahmad, who becomes a central character, earns his living by keeping the one cell phone working and dialing it for the residents, predominantly women who are calling their husbands and other male family members wherever they are off looking for work or sending back money. 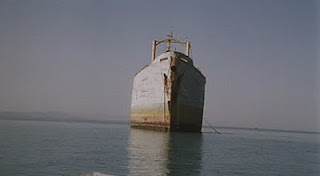 It's also a tremendously isolating place --- there are wonderful profile shots of the tanker, immense and high up in the water, and yet dwarfed by the scale of the sea around it. On board, the teacher, who has set up a makeshift schoolroom by using homemade chalk on the walls, leads his students through a dictation exercise: the sea is immense and the boat is on the sea. We are on the boat which is in the middle of the sea. The sea is beautiful. (I don't remember the exact subtitles.)

One little girl excitedly asks, "Teacher, where is the world?" We are in the world, the teacher responds. "Well, where are we in the world? she asks again. Later the Captain gives the schoolteacher some newspapers he has requested, but they turn out to be quite old. The children use them to practice reading out loud, their phrasings about "we are phenomena and we exist in a world full of phenomena" almost as absurdist as the teacher's dictation exercises. In another scene teenage boys pay money to sneak into an improvised illegal cinema; the fare is German-language infomercials, picked up by a jerry-rigged satellite dish. Someone manages to pick up a music station with someone singing in Arabic (what I assumed was unsubtitled Arabic), but all too soon a crisis on the boat forces them to leave, their bootleg technology left exposed and soon destroyed by the Captain.

A motionless ship with a sputtering economy and its young residents hungering for contact with the outside world ---- sound like a political allegory yet? Further adding to the theme of entrapment is the Fish Boy, who is obsessed with netting fish in the flooded bottom of the hold. "They get in there, from a hole down below, and then they can't swim back out," he explains to Ahmad, and we see him take buckets of fish up top and gently toss them, one by one, over the side.

But the boat-villagers do leave, and far before the end of the film. Are they being forced out, as the authorities have tried multiple times? Or is the Captain finally heeding the warnings of the schoolteacher that the tanker has been slowly sinking for years now? Is he legitimately caring for the villagers in organizing their resistance against the evacuating forces, or is he using them to drive up the price of the boat? And is he a benevolent community leader, or an exploiter? None of these ever really become clear, and I couldn't tell whether Nemat's plan of finding the entire village land and a permanent home turned out to be madness or a sign of hope.

There's a scene where Nemat punishes --- nay, tortures --- Ahmad that reminded me exactly of George Orwell's "Shooting an Elephant." Does he hate to do this and feel forced to by the watching eyes of the entire boat? Does he want to make this punishment? Is this part of his plan to consolidate his power and continue to rule over the village once they are all on land? Or is this the act of someone who can't think of any other actions to take? Like I said, I can't tell whether the film's ending was meant to be a happy one or not, but it had lovely images and framing, and closes not with the villagers but a gorgeous and peaceful shot of the sea.
Posted by Sisyphus at 10:53 PM