My life as a blog

I am amusing myself reading my own archives over here. I feel so floaty and pointless --- did I feel like this last year, I wonder? Did I really sit around and do nothing for weeks on end? I know that the year before that I was chugging away at the dissertation and planning to file despite the beating I took at the job market.

So I have my "planner" to figure out what I did and my blog to figure out how I felt. Now, I make to-do lists. But to keep me honest, I use a planner --- not for planning but to note what I did that day. If I keep up with it, this works really well. I know when I did two hours of writing and I know when I spent an entire evening on the internet. And I put in all the things I've read and my various social engagements so that when I glance back through I can see what I accomplished and that I am not a total anti-social weirdo who fails at human interaction. I also make little notes about me, sometimes, like when I didn't work because I didn't sleep well or had cramps or whatnot.

It's not a diary but more of a work-tracker, so I don't explain much. Days I am sad or upset are usually blank or marked, at most, with a little :( It's surprising how some months that were tremendously productive for me will have a solid week of work hours and then maybe note a party, and then a big blank day with nothing but a :( I don't usually remember what prompted it --- you'd think surely that I would be happy and good-feeling about having worked so much. Maybe I got a lot of rejection emails that day or something.

That's why you'd think collating the planner record with the blog record would be informative. Sometimes yes, sometimes no. The whole first three months of my 2009 planner are blank --- very unusual at this late stage in my recording habit. (I still regularly discover it's Friday and that I didn't put any notes in there and then do a sketchy halfassed job, entering in the teaching or whatnot that I am sure I was around for, but not leave it blank for weeks on end). 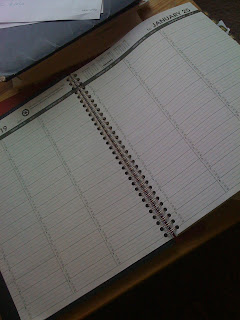 Looking at the blog I can see quite a lot of writing in all sorts of voices until here and here, and then after that I seem to have amused myself with the Magical Month of Academic Publishing Challenge. That may have cheered me up because I was keeping track of my time quite well last summer, and I was reading a lot too. I should make a post, or at least a list, of all the books I read last year. It would be pretty long. (I was going to say, "impressive," but actually I think that's pushing it.)

This spring I was much more consistent on the planner tracker, and I seem to have replaced novels with bad mindless movies. But a lot of those days include a :( or even a "sad. cried and cried." Was this spring more or less depressing for me than last spring? Does :( get weighed more or less than not being even able to open the planner? I can't tell.

The blog posts don't really clarify, either. If I'm complaining, I'm probably in a fairly good mood. When I'm really really upset, I clam up. Then I might post a little light something so that there's not complete silence on the blog for weeks. Then, sometimes I can cheer myself up with my own blog posts, particularly if they are so over-the-top whiny that they are ridiculous and thus make me laugh. So they are never a good indication of my mood.

Collating these documents, I'm struck by how much stuff I don't post to the blog, particularly if it might identify me, something that's gotten way worse as more people I know are on facebook and I try to not post the same type of info to both locations in a single day. Taking events at random from this and last spring, I haven't posted anything about knee surgery, coming in second in a search at a major university, being evacuated from my apartment because of a fire, having to go in to the ER and subsequently be treated for panic attacks, being a finalist for a prestigious postdoc, or having another debilitating bout of labyrinthitis. Wow, the last couple years have really kinda sucked for me, health-wise, haven't they?

I just realized I don't know where I'm going with this post.

Maybe I've come abruptly back around to the question of the future of this blog and what I want it to do. I did a lot of wrestling with the idea of stopping it or yanking it from the internet altogether this spring --- I keep expecting to see months and months of no posts from that time; evidently I posted even more than usual about off-topic random things while I was churning through that quandary.

I debated dropping my pseudonym, moving to a new blog, moving this blog somewhere else I could password-protect things, and wiping any trace of the whole thing from the internet. (I should note that these options were connected with incredibly violent and angry mood swings in all directions.) All of those things are still on the table, I guess, because I might get a job offer and what will I do with something crazy like a blog if I were a new faculty member? And if I move and pick up some regular nonacademic job somewhere, what will any of this matter?

I should note that halfway through the writing of this post and after perusing my own posts and notebooks for several hours (narcissism how I love thee), my family called, and in the course of chatting with my dad I surprised him and myself with my statement that I was ready to move back home into the basement if this job thing doesn't work out.

I don't know where that acceptance came from, either. I guess I have been angsting about it and ranting about it for so long as part of wrapping my head around it, and I just abruptly realized it was time? Or maybe I am just positive that I will get a job offer out of this. Or perhaps I am tired of sitting around here avoiding applying to jobs and I want to do that in a new and different location. Maybe I have become more cynical, not less, and have decided that plenty of unambitious stoner thirtysomethings mooch off their parents in their basements and I should jump on the bandwagon while the jumping's good.

Even when I was most angry at the world, going "I'll show 'em!" I didn't actually delete my blog because I thought it had useful advice for future grad students. And I'm damn funny. On this rereading I believe more in the latter than the former. But whatever happens, don't expect a play-by-play, and don't expect the updates to be either timely or emotionally accurate.

After all, I'm nothing more than a fictional character.
Posted by Sisyphus at 9:38 PM

I am amusing myself reading my own archives over here.

It's a disease! Avoid at all costs! Introspection is overrated, believe you me, I'm an expert in exactly this sort of professional avoidance. (As you well know.)

Well I like your blog- even if you are a fictional character (but aren't we all)- so don't delete it!!

ALso as a historian, I think that blogs will be the personal narrative sources of the future, so I hate it when people take them down. Think about the children!!

Funny, I never considered you a fictional character. I consider Cog/Sisyphus as an aspect of the real you. Maybe I don't know you IRL, but you certainly exist as an iru. And I really enjoy knowing that iru, and reading your blog. Please don't go!

Oops. I thought iru would come up on google... and it didn't. An iru is an aspect of a self (ancient Egypt) - thus a god had more than a single iru - a good side was represented by one hieroglyph, while the same god's destructive side was represented by yet another hieroglyph. A pharaoh had several iru - as earthly king, Horus, etc.. We all have iru - child, parent, sibling, friend... So thus, Cog is an iru of you!

I've been meaning to write this for months, or longer, but it always seemed like it would come out of left field: you should keep your blog up, at least for a while, but you should put a freaking tip jar up so we can PAY you for this writing you so obligingly provide for free. I would be happy to chip in; I bet at least a few of your other regular readers would do so as well. Don't take it down before passing the hat around. Seriously. You really, really deserve it after all this time and, er, abject misery.

I understand what you mean and I do the same thing, NOT post about HUGE things because it's a public forum. (I had knee surgery too, which turns your life upsidedown, as you know. Retroactive hugs to you for that! And for the frustrating job search! And all the things you couldn't blog but had to endure.)

Sometimes I feel the futility of blogging...like what will happen when all is said and done? But I so value the community. And I vote for you to keep up a blog, either here or elsewhere, because the community cares about you. :)

On a selfish note, I like reading your blog, even though it pains me to hear how tough things have been for you lately. At least half the reason I started my own blog was so that I could air my grievances and fears pseudonymously to a readership that understand what I was talking about. From that perspective, you have plenty of reason to keep the blog going.

The frustration with writing these things down is that we can begin to fantasize that we are authoring, rather than reporting, and that the mere act of creating a transcript of our activities will somehow turn them into a coherent narrative with a happy ending. (I feel like that on occasion, anyway.) Blogging requires a degree of faith that, sooner or later, you will receive a happy ending to report. Not the most comforting thought, but life is like that in general, no?

Meanwhile, I draw professional and personal encouragement from your blog. I doubt I'm the only one to feel this way. And, I hope, you get some comfort yourself from others' blogs. Maybe being part of that reciprocity is a worthwhile position in itself.

And here I thought you had never even had a job interview. Sneaky. :p

I suppose I put too much of myself out on my blog. I suppose it's dangerous to be so open, but then, I don't really believe I'll ever get a job anyway. (just kidding, sort of...) I guess I am more guarded with my RL friends because they don't really understand my career path. And I don't want then to think I'm pschotic about how I'm raising my kids. Hm. Maybe I've got my life backward. Maybe I should be more open and honest with people I know and more guarded with strangers.

What they all said! You write 'em, we'll read 'em. And hey, retroactive congratulations and/or sympathy, as appropriate -- there's been a lot going on, huh.

Being a finalist for a prestigious post-doc and an on-campus interviewee--those are good signs, even if it doesn't seem so with everything else going on.