Ah Vanity, Thy Name is Sisyphus

See what happens when I have too much unstructured time on my hands? The summer I graduated, I blew all sorts of money on an iphone. This time, I just had a slew of expensive dermatology treatments.

It was for purely vain cosmetic reasons --- I was putting on lipstick or something and used a mirror in direct sunlight a while back, and went "aiigh! My skin is terrible!" --- but I am really glad I went. Not only do I say it is a justifiable indulgence, my dermatologist took one look at the dark splotch I hate the most and said, "I'm not lasering that. We need to take a biopsy." Then he took a bunch of pictures on a digital camera and explained to me the differences between my little brown splotches and the big one, which is multi-colored and irregular.

See, here's an example I pulled from about.com: 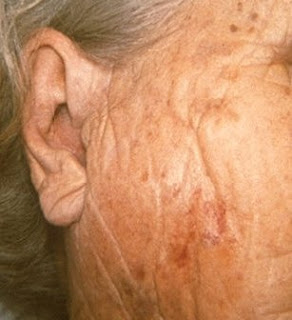 (It's kinda hard to find good pics on the web that are not absolute worst case extreme scenarios. Most of the pics I found were in the "hundreds of lentigos, oh, and a bunch of melanomas too!" category)

So the dr. explained what a biopsy was and how he was going to do it, as well as gave a quick reassurance that if it was cancerous or precancerous, it was very surface and thus eminently treatable. Plus he said there was a very high probability that it was just fine and we could come back and zap that little sucker later, but it was just good to know that for sure before proceeding. He has had some examples of people going into a spa and having a melanoma zapped instead of properly diagnosed. I like this guy. He seems very trustworthy.

Then he talked me through the whole laser process and the aftereffects and the potential side effects and all that, and I agreed to have the other splotches zapped. He also talked me through the various post-treatment regimens to take care of my skin and not have stuff come back, and outlined various options for what would work. Now, the lasering and all these fancy medicines and sunscreens were very expensive, but I felt very informed about it all, and I think paying lots of money for stuff that has been proven to work and might actually prevent cancer is worth it. (Whereas dropping hundreds at, say, the MAC counter would be fun but not actually part of a health regimen, and more of a pure indulgence.)

I've been to this guy before, a few years ago, and he prescribed a skin lightener instead of the laser last time (which I didn't see much improvement with last time so I gave it up.) So I've been wanting to have this treatment done for a long time and just keep putting it off for money and time reasons.

Ok I forget what kind of laser it was but it is the kind that targets pigments and burns them off, not the "ablative" kind that causes the face to peel. I had to put gauze pads on my eyes to protect them, and then he would press this thing kinda like a big flat pen or marker up against my cheek --- pretty hard, as he said the pressure would prevent me from forming bruises --- and then there would be this little sting and the faintest burning smell. Yeah, that sounds really gross but it was a pretty easy procedure. The pushing against my face hurt the most, and that wasn't too bad. I could see the laser flash through my eyelids and the gauze. The whole thing including all the explanations took a half hour. And he said that while all the crusting and peeling he described would happen to an extent, he usually overstates things and patients come back and say there was almost nothing in terms of aftereffects. He certainly overstated how bad the process would feel, so I'm optimistic about the recovery being nothing much at all.

And now I am happy! At last I have done one of the things on my "I wish I could get rid of this" list.

Looking back at this post I am struck by how many differing patterns of rhetoric I use to justify my beauty choices --- isn't it weird that I have to do a lengthy explanation and can't just do it? And aren't beauty regimens the most Sisyphean tasks of all? Nobody stays clean. Hair grows back, armpits get smelly again. Makeup fades. (or more specifically, smears, cakes, slides, and gets transferred to various other surfaces.) Part of why I've wanted this treatment for so long is that it promises to be much less of a daily effort to improve (and more of the dramatic changes of the makeover instead) and yet, I'm still going to have to put on lightener and sunscreen every day after it heals. And, realistically, I'm still going to change a little bit every day, become a little bit older, a little bit different even though it will still recognizably be the same body. I guess thinking that you can permanently fix yourself in one state like a photograph, that's the real vanity.
Posted by Sisyphus at 12:22 PM

Good for you! Especially getting the iffy one checked. I hope the side-effects aren't uncomfortable.

I second the "good for you"! I don't know why, but my family is prone to skin tags, which I cannot stand. I had some on my face for years, and I wanted to get rid of them, but my mom wouldn't let me because it was too expensive. (She said!) As a grad student I decided I'd look into it. It cost about 100 dollars to get them removed, and for that small amount, I was so relieved and thankful. I would have paid five times that amount to feel so good. So yeah, I totally understand. Glad you did this!

I was gonna say that this doesn't seem like vanity so much as keeping things healthy. Especially finding one to biopsy! My dad has had skin probs (not malignant, but stuff to biopsy and get rid of) and he's a bear about all the sunscreens, etc. - so I say it's money well invested! And hell, if you wanted to get eyeliner permanently tattooed on as well - if it makes you happy, do it! As long as you're not knocking over a 7-11 to acquire the funds, it's all about what makes you happy.

I'm assuming the little spot wasn't a melanoma, or have you found out yet?

Ooooh, I am so glad that you wrote about this, as it is my most dearly desired beauty update. I am totally speckled, and I always wonder how much it would really be to get them zapped off my face. In my book, you don't need to justify this, even with the very sanguine medical reason; those marks are unsightly. Or mine are, anyway. Yours, I assume, were darling and cute. Congrats! And don't forget the sunscreen!

Great post. You inspired me to make that appointment with the dermatologist that I've been avoiding. (In fact, when I asked them to give me another copy of the referral sheet, they said, Uh, this is from 2008. Oops.)

@Fie: eww, skin tags! My mom has always had tons on her neck --- like I'm talking 50 or 75 --- and has always refused to get them done because it would be for purely aesthetic and not medical reasons. I always was so squicked out by them and horrified by the thought that I'd grow up and turn monstrous like my mother. It wasn't until I hit 30 that I realized my sunspots means I have my dad's skin.

The biopsies I've done in the past usually take two weeks to come back. (I had a mole in my eyebrow a few years ago that made it grow in a forked fashion, which always irritated the hell out of me, and I haven't even thought about it since, which is great bc I don't rage every time I look in the mirror. That said, sunspots are _very_ benign and removing them is purely aesthetic.

@kfluff my splotches are not cute at all --- the dark one that we biopsied is 1 centimeter by 1.9 centimeters! They do not look like freckles at all. Especially now that they are tender and crusting.

And no way on the tattooed eyeliner: I don't even want to think about eyes and needles coming into close proximity to each other.

How much did it cost? Mind sharing? I have a small constellation on my right cheek and, although Mr. P claims to adore it, I can't stand it.

But if it's too much money forget it.