There is faculty parking and student parking here. There is a lot of faculty parking near the buildings where I have an office and I teach. So I was confused when all the regulars around here would tell me there was lots of parking and then in the next breath tell me I had to get there super early in the morning to make sure I got a space. It wasn't until today that someone explained how things actually work, which is that faculty cannot park in student spots and vice versa, but students were going to park in all the faculty spots for the first month or so and get ticketed and/or towed, because the faculty spots are all much closer to the buildings.

I have also been appraised of the road leading in to campus that during the school year becomes a gauntlet of enraged foaming-at-the-mouth yuppie SUV drivers jockeying for a spot to drop their kids off at a private school, all flip-flopping madly between roaring along at top speed to get their Jadens and Cadens dumped off before they are late for work, and honking furiously at those other speeding drivers who are going far too fast and may damage the precious children once they are actually out of the car. Seriously. I have been told of an alternate route that, because of all the one-way streets around here, adds an extra 10 minutes on my commute time, but which will get me on to campus without approaching it from the side nearest me, aka Yuppie Death Trap. I have also been instructed to just not try and leave campus around 8:30 and 2:30.

So today was the first day I drove in that things were picking up and starting to get crowded. Up until this time, I would drive into a likely looking lot, (ooh alliteration!), tootle on down the aisle, and pull into a spot.

Today I pulled all the way down the aisle only to discover that it dead-ended. They all dead-end. Whether you see the black space or the white space of those E's as the aisles or the parking doesn't matter. You drive down the back of the E and then turn to go down one of the legs and there is no way to get directly to the next aisle. Who designed this? What about traffic flow? I am so confused.

So confused that I sat there for a second once I ran out of aisle. Then I started to back up and turn around but when the lots are full (particularly with big SUVs and extended-cab pickups) there isn't much room to turn a car around. It felt like this scene from Austin Powers: 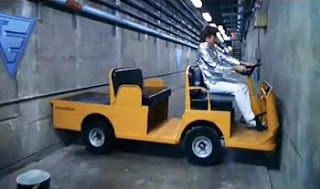 Cue me throwing my car into reverse, going two inches, then into drive, then all over again, all the while cussing to myself and saying, "didn't I move away from CA so I wouldn't have to deal with this?"

Except when the lots are full and plenty of people are coming on campus, you know what happens? Yes! Someone else pulled into the same aisle and pulled up right behind me. So for a second I couldn't do anything, and then I had to wait while that car just backed straight up the aisle a ways, and then I had to do some more throwing the car around, except this time with much more anxiety because I had an audience and I have paranoid fears of being called an idiot and bad driver (I hate parallel parking when there is anyone in the car or even around to watch), and then, once I was turned around, I had to wait a minute while the driver who had blocked me in figured out what I was doing and why and then turned around.

And of course, then someone else pulled into the aisle. This story could go on forever, but luckily that car had only just turned and could just make a wide turn back out. I don't think backing up the whole length of the aisle would be feasible or safe. And seriously, who the hell designed this space? Bizarre. I shake my head disapprovingly.

In other news, I seriously burned my mouth on an overly-hot crispy chicken sandwich today when I was out for lunch with some people. Ow. Or as someone who's burnt their tongue might say: sneef drab bloof floohfb!
Posted by Sisyphus at 3:01 PM

god... what a nightmare. I hope you can find a sweet-spot time to come into school so you have absolutely no parking difficulties. Good luck!

Oh my. I'm sorry, I had to laugh at all the cars pulling in one after another. What a mess. Hope it smooths out soon!