Huh, I haven't done a single worthwhile thing all day. Well, I did load and run the dishwasher. That's gonna have to count.

Yesterday I was plowing through a bunch of criticism books and the plan was to finish them all today, type up and slap the notes into the chapter Monday, and then return them for different materials I need on Tuesday when the library is open. Maybe I will get the energy to go back to it, but today I am just liking the laziness. Ahhh.

Have I mentioned how much I love my local hippie-ish grocery store??? Remember, they are the place that gave me a coupon for a free chicken. They are always giving me coupons that I would actually use, that are for healthy stuff people go through every week, instead of random processed crap that I never use or don't like or want to keep to a minimum in my diet. So, for example: 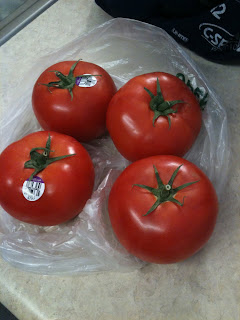 I got a coupon for these a couple weeks ago! Another time I got a coupon for pears! And that is to say nothing about the free cage-free eggs, the orange juice, the Irish cheddar (yum!) and brown rice. The coupon for ice cream from last week, alas, I did not print and then couldn't bring up on my phone in the store, but perhaps that is all for the best. You can see from this list that the free stuff makes a major difference in my grocery bill, since I'm usually buying these things anyway. Of course, the fact that I am buying lots of fresh stuff and not packaged/preserved crap full of corn and soy filler means that my grocery bill is pretty damn high even with this help, but oh well. Good health is a worthwhile tradeoff, I think.

What with all the berries appearing in my store and the prices going down, I'm hoping that the next coupon will be for a big box of berries! Yum.

Ooh, the other thing they sent me that I liked was a coupon pack encouraging me to have a potluck. It had instructions and you were supposed to give everybody a 5$ off coupon and keep the 10$ off one for yourself. I didn't actually have the potluck since it was the end of the semester and everyone was going away, but I did hand out some of the coupons. One of the postdocs actually snitted on the present (if you can turn "having a snit" into a verb like that)! "We are moving, Sisyphus, we are trying to get rid of all the food we have!" And they are quitting the postdoc and moving back near family rather than stick it out another year, and of course that state does not have this hippie chain store. But so what? It's a coupon! Look, buy a tin of coffee and some granola and then you get a bunch of free snack food and veggies for the trip! I'm sure you can fit a smidge of food in the car! Whatever.

At the end of it, I had two coupons left, and you need to have a different email address on them, so now I am going to get mailers at my school account as well as a bunch of my various gmail accounts. Bleah. Although, if I can somehow snag multiple sets of coupons... hmm.

Anyway, you might wonder what I did with the tomatoes. Well, I experimented with quinoa, which I find rather boring and mushy. But really, it's just that quinoa is not interesting enough to eat plain --- you need to experiment with making salads and dressings! See: 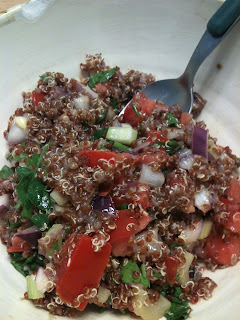 This is red quinoa. I was inspired by this post by the Amateur Gourmet on how to convert haters to quinoa lovers, although, as you can see from the pic, I created something a lot more like a tabbouleh salad. I made a mustard/lemon/olive oil dressing (left out the honey from that recipe and toned wayyy down on the mustard) and added a bunch of chopped parsley and leftover celery, which made it nice and crunchy. Then I added red onion, finely chopped ---- something I like but as I get older the onion breath from raw onions stays longer and longer and really starts to bother me now. My dad complains of the same thing. Which must mean one thing: I'm old!

I'm going to practice making more dressings and putting them on things other than just lettuce-based salads, because it really does bring my basic cooking up to a more interesting level. Remind me to post the 1 part vinegar to 3 parts oil somewhere in my kitchen so that I don't have to go looking through four cookbooks and the internet every time I want to experiment.

Today I made a nice, simple little green salad with a lemon/olive oil dressing, involving only those ingredients plus fresh zest from the lemon and some salt and pepper. It tasted great, so fresh and lively. And that tip they tell you about how it is easier to just get an old glass jar and shake up the dressing instead of trying to whisk it together is totally true ---- as long as you're sure you didn't beat up the lid when originally opening the jar, preventing it from completely sealing anymore. Yeah, take it from me: it's not pretty.
Posted by Sisyphus at 1:37 PM

Could you come over here and make me some of that salad? I would kill for someone to cook for me for a meal or two.

Dr K, it's not that exciting, really. But if you want, I love feeding people! Come on over! We'll cheer you up!