So in the midst of one of the many "oh crap! I haven't gotten the Christmas gifts for everybody yet!" realizations I keep having and yet keep doing nothing about (more on that anon), I decided that I wanted to get gifts for the cats. Why they get priority gift-getting over my brother and other remaining family members, I don't know, but I digress.

You might remember that my cats had collars on the blog at one point, or in blogpics, and now do not. That was because Timido scratched his into a mess (he's an itchy little cat) and Loquito kept getting the metal tag and ring caught on the carpet when he rolled around and then the whole collar would pop off. So I think I want to splurge and buy them new collars.

Obviously this won't help when I drop them off at the cat kennel later this week --- they get mad at the idea of unlabeled cats and tape some masking tape around their necks with their names markered on them (which I find kinda ghetto but hey, we are poor ghetto types these days) --- but I figure they need nice little collars and labels for the next time the state catches on fire, or floods, or mudslides, or whatever comes next, and someone finds them and tries to return them to me. So. Collars it is. And maybe some new catnip mice because the collars are not actually much fun for cats.

Anyway, collars. They say ("they" being the mysterious pet ownership gurus who are masters of guilt and anxiety production) that cats need "safety" collars or "breakaway" collars, not the leather rolled collars that dogs have, cause they could get caught on something and choke to death. Those little breakaway collars with the plastic buckle, however, won't hold my cats for more than a minute; one scratch with a hind foot and it flies off. So does anyone have some leads for a 1) non-choking 2) cat-sized 3) non-escapable cat collar that either has a tag built in or can have tags hung from it?

The cats would be much obliged. 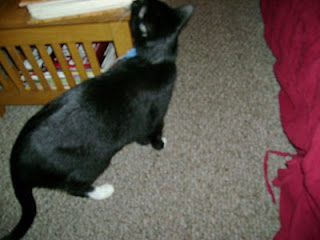 (here, have a blurry cat photo in recompense.)
Posted by Sisyphus at 9:47 PM

My cats are pretty fast and love to make runs for the door -- so they have collars with bells on them. Thus, I'm a bit of a cat collar expert.

Those plastic clip collars are worthless. The best alternative has some elastic as a factor. One cat has purple leather with rhinestones..the other is 100% elastic. Both came from either PetSmart or PetCo -- the bad news is that the most recent purchase was a few months ago and his collar was on the clearance rack.

You can buy little permanent tags for either version.

I'm impressed that y'all have cats who will even consider collars. Mine refuse. REFUSE!

Ours aren't happy about it, but we've gone from collars to those figure-8 harnesses - largely because one of them is an escape artist and can remove any form of collar in under a minute. The harnesses also have the advantage of not being as itchy around the neck, since they go over the breastbone instead of around the neck. There is a link between the shoulder blades meant for a leash clip, but it's a good place to put tags. The real advantage is that when we have to move or take the cats in the car, we can put a leash on them and tie the leash to a clip in the back of the car, so no more trying to stuff an angry cat into a carrier!

Get them microchipped and then they will always be identifiable, whether or not the collar stayed on.