I'm still feeling a bit under the weather. Meh. In hindsight it was a stupid idea to go in and have a little medical procedure done right before the holiday weekend, because not only do I feel blah and have to recover, I can't get in to do the follow-up until mid next week.

Last night I wanted to watch my Mad Men commentaries, but the stupid actors gave away so many spoilers in the first episode that I had to stop! Rrr! So now I am waiting for another disc to come --- I thought that if I waited until episode 6 to start listening to the commentaries I would be fine, but evidently not.

Instead I got sucked into looking up random information on Wikipedia, and then proceeded to follow all sorts of random links, which was quite fun in its own way. From one thing to another to another I got sucked into reading all up on cocktails and alcohol (probably Mad Men-inspired, no?) and then started looking up all sorts of ingredients and recipes, and found this book: How to Mix Drinks, or, The Bon-Vivant's Companion, which was published in 1862. Since I knew it was out of copyright I looked for it on Google books and then had some fun reading most of it. I love poking around in random old stuff! 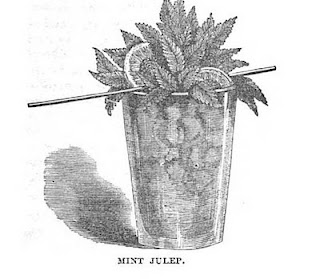 Punch seems to have been very popular at the time, and it was fun learning about the differences between "slings" "fixes" (not fizzes), "juleps," "cobblers" and "cocktails," although, of course, their meanings probably change over time, and the measurements in this book are purposefully vague, as befits someone talking about his art. Practice and find what works best for you, indeed! Also, there are a lot of drinks here that use eggs and I find that absolutely disgusting. I've never been a fan of eggnog, either. Incidentally, there is a whole chapter of different varieties of eggnog, should you be so inclined. I'll pass.

What I also found hilarious was that jello shots are not a modern invention. Witness the recipe for "punch jelly," which uses "orange, lemon, or calfs-foot jelly," or gelatine to create a delicious dessert. However, "the strength of this punch is so artfully concealed by its admixture with the gelatine, that many persons, particularly of the softer sex, have been tempted to partake so plentifully of it as to render them somewhat unfit for waltzing or quadrilling after supper." Ahhh, college students ----- they really haven't changed at all over time! 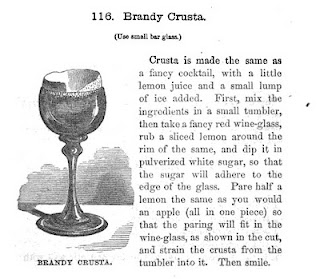