Turn of the Screw*

Behold one of the most dangerous objects known to humankind: 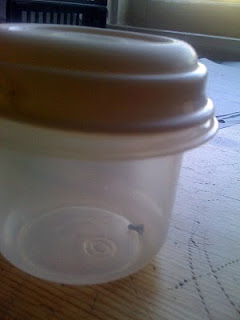 This screw came off of my laptop display, in the corner by the hinge. I have been wanting a shiny brand new macbook for a while now, but, as you may remember, I don't have the money to update it.

I would go down to the mac repair store and have them fix it, but that would involve bringing me too close to the sweet sweet temptation of shiny new laptops, monitors, and ipads. Oooooh. To say nothing of all the fancy accessories. And the "new mac" smell.

I don't think I would be able to control myself.

*Also, has anybody read The Turn of the Screw? What a weird excuse for a scary story. Could someone explain to me the point of the title? Is it about torture on the rack? What's up with the passage "if a child gives the effect another turn of the screw, what do you say to two children?" "We say of course, that they give two turns! And we want to hear about them!" It's not that the story is bad, per se, but I read it and just never understood the point of the story or the title.
Posted by Sisyphus at 7:42 PM

Oh boy, do I know what you mean! An Apple store is just full of temptation - new iPhone, iMacs, laptops... my laptop is aging and the uni won't replace it. Which means if I need a new one (and now I'm so accustomed to it I can't see self w/o one) it'll be up to me.

Self control is so hard.

The point of the story, as I recall, is that unmarried women are evil and should be controlled by men as fully as possible.

I haven't read the story in ages, but as I recall, "the turn of the screw" refers to ratcheting up the suspense a bit. Something like that. I'd have to reread it, but I'm probably not going to. :) Too much lounging and writing to do.

Ugh. Yeah. I want a new Mac laptop, too. Mine is only just over two years old, but eldest has dropped it a couple of times when he was trying to be thoughtful and bring it to me while I was showering. I'm lucky the damn thing still works at all...