Digging oneself out of a financial hole

Huh. Out of a hole? How does one, literally, dig oneself out of a hole anyway? 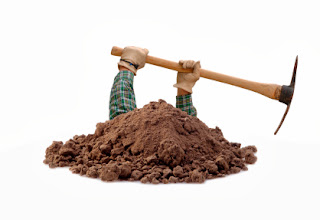 I mean, I can see how you can dig someone else out of a hole --- mainly by putting dirt into the hole. But I don't really get the logic of how one can do that when already inside the hole.

Especially if it is a big hole, like this, the first one I found on my google image search: 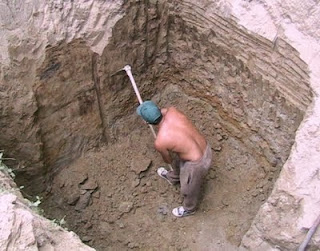 I'm sure you can already see my biggest problem: distraction. That and being tired of sitting in holes. The good news is I finally have a nice-paying job. (*what follows is totally #firstworldproblems and you might want to look elsewhere if this post is going to annoy you*) I looked at my take-home pay (when I am actually allowed to take it home; see here for story.) and looked at all my credit card debt and after a little gasping and gagging, figured out I could pretty much pay it off in about 10 months.

I mean, on the one level it's very easy. On another level, it's just like going on a diet, and usually I gain my most weight immediately after deciding to go on a diet. I know it's weird, but there's something about the mental decision making and planning that makes me feel like eating something, as if all that thinking and effort should equal time passing. It's like I'm thinking I'm living through a sports film montage, when really only 30 seconds of the film have gone by.

I bet I could lose all the weight I need to in 9 or 10 months too ---- but the sheer willpower of choosing not to do something (eat, spend) for almost a year is soooo exhausting! It's not like deciding to take a class or go on a hike --- it's deciding to be good a zillion times a day, starting over again every minute! Ugh.

A few days ago many people on my facebook feed were reposting this article about scarcity mindset and how people slide back in to poverty even when they are given means to get on top of things for a while. Some of those people were relating it to the sad death-of-an-adjunct story that has been trending everywhere, but I had a more blackly humorous view and immediately thought of the last words of the Misfit in Flannery O'Connor's story: "she would have been a good woman if someone was there to shoot her every moment of her life." Wouldn't we all?

Thing is, I am living a new life in a new place, and I really want some new toys to go along with it. I also want to do up my apartment all shiny and fancy, or at least replace the empty boxes that are serving as furniture in some places. (And what about decorating the office with wall art???) I have been intermittently on a "no-buying diet" for most of the three years I was on my postdoc, trying to dig, if not out of my previous debt, at least manage it as much as possible.

Making a game of "how many days can I go without collecting a receipt" helps keep the expenses for a month to an absolute minimum, but the down side of not buying or replacing anything is that stuff gets old and worn out. I killed all my jeans on the way over here. I'm due for new, non-holey underwear (underwear! FFS! Who wants to spend money on that!?!?! Work-appropriate underwear that nobody sees, I mean). I tossed all my scuffed and dying sandals before I moved. Since arriving here my frying pan and a couple spoons have died (the plastic handles are splitting and warping off the silverware set I bought at --- Bed Bath and Beyond? --- back in 1994 as part of my going away to college). If I don't plan for some replacement stuff and at least a couple new toys, I am going to fall right off my budget plan and end up on a binge. If I do plan to let myself replace and add things, my budget plan is going to take a lot longer than 10 months.

And this isn't even taking into account anything like emergency savings or my student loans or extra savings for retirement and whatnot.

Now the bad news. You did see the "good news" phrase come up at the top of the post, right?

One of those old and getting older purchases is my car.

At 11 years old, we are right about due for major expensive repairs or replacing the car. That wouldn't be cheap either. (and what $ do I have for any sort of downpayment?)  I just went in for my oil change and the major inspection thingy is almost due, and when the mechanic looked at everything he found cracked fuel lines and a bunch of other things. He estimated about 1200. Oy. I at least managed to reschedule for a couple weeks after October starts so that I can throw money at the card before loading it up again. I can't wait too long, though, since my cousin is coming out to visit (that is, he will be Way Over There which is as close to here as you'll ever get on a random trip, so we are going to split the difference and meet up in Cool Scenic Park and run up his expense report.) That means I need the car to be working and reliable before then, so, tons of money it is. 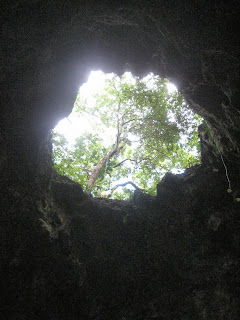 
You see where this is going, right? Saving money at the end of the year is as bad as dieting --- a mini-vacation here, then everyone in my family has a birthday, then Thanksgiving and Christmas, and foop! I have been spending all sorts of money and eating all sorts of holiday-themed things! To say nothing of the fact that I have no concept of patience or time and am now ready to be rich and thin, having contemplated the hardships of willpower for a whole thirty minutes!

Yecch. I guess I gotta keep pluggin' away, find some new games to keep me motivated, and ask around about summer teaching work.

You know, if it actually were a literal hole I was stuck in, not spending my money and not overeating would be much easier! I mean, so would starving to death, but who's counting?
Posted by Sisyphus at 6:00 PM

You can do it! Good luck!

One thing that helps me is telling myself I can get things later. I like putting stuff on my Amazon wish list, or telling myself the best time to get furniture is in May when the students move out and everyone is trying to get rid of their stuff. (That won't work for underpants though-- some things you just have to buy.)

Personally I'd pick either money or dieting right now, and I'd pick money because you can get out of that hole and once you're out of it it'll be easier to stay out. Then you can focus on food.

p.s. One nice thing about the holidays is that grocery stores tend to have awesome sales. Make a plan to stock up on sale things around Thanksgiving.

Well, with money as with dieting, I think it's always helpful to have a "budget" (caloric or financial) for treats. So even when dieting, I'll have a good chocolate (small, but rich) most days. So if it helps to say, this month it's the new frying pan, next month it's new sheets (or whatever) because then you won't binge, I'd do it. Meanwhile, you can be happy your actual paycheck is more than $9.66, and that next month maybe the direct deposit will work...

Am pondering the car question myself, as my car will need a new timing belt soon, and I'd actually rather do it before it needs it than after...

Stupid stupid timing belts and fuel lines and whatnot. Are they cute and shiny? They are not! Who will see when I splurge on them as my October purchase?

Cars and underwear are definitely boring. Sadly, also necessary. Instead of "dieting," think of it as "financial health": not depriving yourself, but choosing the healthy option.

And get to know your area's second-hand stores. If you have to, drive to wherever the nearest ritzy area is. You can get great, great stuff at good second-hand and consignment shops, just because rich people decided to redecorate or get the very latest clothes or get rid of the china set they never use.

This doesn't help with cars or underwear, but, for kitchen stuff, try thrift stores. We buy virtually all of our kitchen gear there (including silver ware); it's super cheap and works just fine. Plus, you end up with wacky eclectic service things.

Just thinking... why don't you set your budget so you pay off your debt in 15 or 20 months, instead of 10? You'd still be doing the virtuous thing, and you'd give yourself a little bit of budget to buy things.

We're facing the car thing right now, too. With only four months remaining to pay it off. Grr.

+1 to the anonymous commenter. When I tried to pay off my debt quickly, I ended up digging a deeper hole. What worked for me was to pay things off more slowly so I had some money for those things that inevitably happen, like my clothes falling apart!